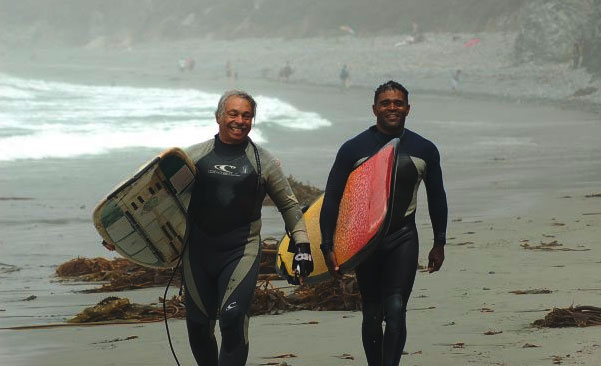 “Mother Ocean knows no prejudices at all,” says Tony Corley, founder of the Black Surfing Association. “She’ll slap the shit out of you or make love to you and bring you back again. She’s a wonderful woman.” Corley (L) pictured with fellow BSA Member Gregory Rachal at the annual BSA surf retreat in 2008. Photo: Courtesy Tony Corley

“I think overall, what it really comes down to is there isn’t an overwhelmingly welcome feeling [towards black surfers],” says Woods. “Most of the black surfers we talked to had experienced bigotry, racism, or whatever whether outright – some of the older guys had fights and death threats and some of the younger guys have had more thinly veiled comments made. The surf community has made very little effort – the surf media and media in general have made absolutely no attempt to bridge that gap. I don’t think they necessarily see a need to. I think that’s fine within the surf community, because it protects what they want to protect.”

Woods isn’t alone in his attempt to bring such tensions to light. Alex Klein, a 29-year-old filmmaker based out of New York City, staged a similar conversation by focusing on surfing’s ability to bring peace to Israeli and Palestinian surfers in his film, God Went Surfing with the Devil.

“The way I view it – the conflicts are generational, and with every new generation there is a chance to make progress towards peace,” said Klein, a University of California Berkeley graduate and former professional skateboarder. “It’s really through the power of surfing that [the Israeli and Palestinian communities] were able to transcend the violence. The Palestinians say when they paddle out they feel free. To me, it was incredible to see how they could utilize surfing to put this violence and strife behind them. Obviously, you can’t teach everyone in the world to surf, but that attitude I think can spread throughout the rest of culture and society. It will take time, but I’m hopeful.”

Klein’s optimism matches the inclusive buoyancy intrinsic to the sport of surfing itself.

Tony Corley notes, “Surfing is such an equalizer. You can go out and have the best time of your life or you can die. Mother Ocean knows no bounds.” She is vast and unforgiving, and although surf culture is susceptible to the same misunderstandings that inspire fear and hatred around our planet, I am convinced that open, respectful dialog coupled with a transcendent interaction with nature is a powerful antidote. If Jews and Palestinians can set aside their religious and political differences long enough to share the same lineup and the same exhilaration caused by the simple act of riding wave, then maybe we can set an example for the rest of the world to follow. We can trailblaze. Move forward.

“In the sport of surfing, one thing sticks out in my mind above everything else,” says Doc Paskowitz. “There is one character of surfing that trumps all others, and it is the almost otherworldly, supernatural, cosmic effect of surfing – of riding a wave – of paddling out, seeing a wave, turning around, paddling, catching a wave, standing up and riding it in. There is a kind of result to that behavior which is so passionate, so positive, so fulfilling, so soulful – that at that instant there is a spiritual dynamic. A kind of an extraordinary feeling that ordinary guys get that is so overpowering that it raises you above anything that is negative and contrary to the sweetness of life.”