North American Heatwave: We Need to Know How Climate Change Will Change our Weather 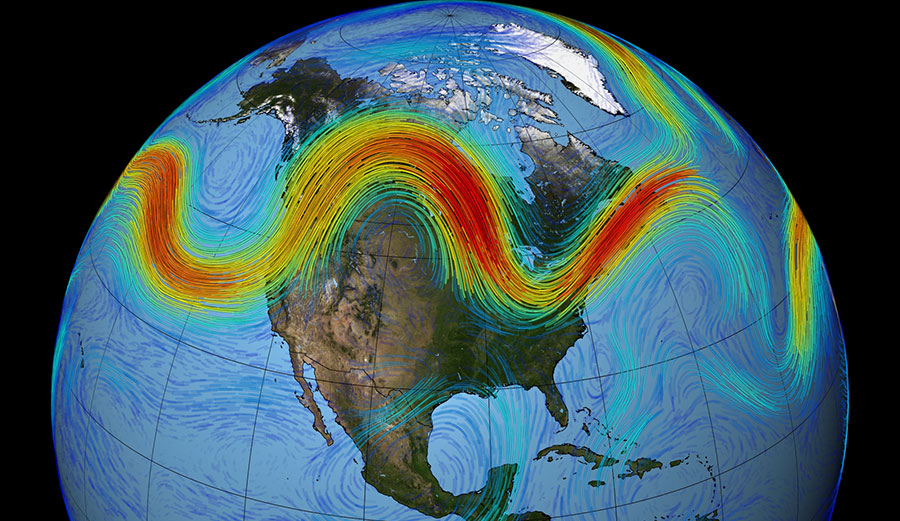 Heatwaves occur when there is high air pressure at ground level. The high pressure is a result of air sinking through the atmosphere. As the air descends, the pressure increases, compressing the air and heating it up, just like in a bike pump. Image: NASA

Eight days ago, it rained over the western Pacific Ocean near Japan. There was nothing especially remarkable about this rain event, yet it made big waves twice and kicked off the North American heatwave.

First, it disturbed the atmosphere in just the right way to set off an undulation in the jet stream – a river of very strong winds in the upper atmosphere – that atmospheric scientists call a Rossby wave (or a planetary wave). Then the wave was guided eastwards by the jet stream towards North America.

Along the way the wave amplified, until it broke just like an ocean wave does when it approaches the shore. When the wave broke it created a region of high pressure that has remained stationary over the North American northwest for the past week.

This is where our innocuous rain event made waves again: the locked region of high pressure air set off one of the most extraordinary heatwaves we have ever seen, smashing temperature records in the Pacific Northwest of the United States and in Western Canada as far north as the Arctic. Lytton in British Columbia hit 49.6℃ this week before suffering a devastating wildfire.

What Made the North American Heatwave?

While this heatwave has been extraordinary in many ways, its birth and evolution followed a well-known sequence of events that generate heatwaves.

Heatwaves occur when there is high air pressure at ground level. The high pressure is a result of air sinking through the atmosphere. As the air descends, the pressure increases, compressing the air and heating it up, just like in a bike pump.

Sinking air has a big warming effect: the temperature increases by 1 degree for every 100 meters the air is pushed downwards. 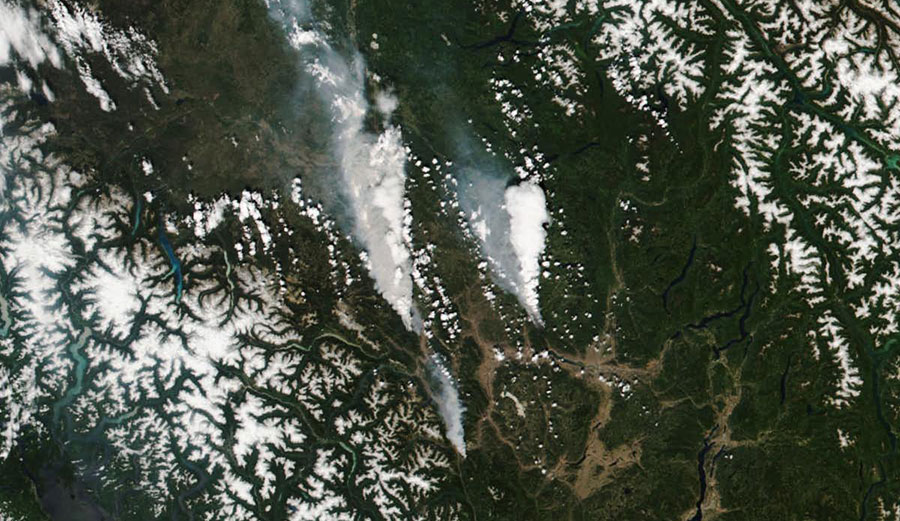 The North American heatwave has seen fires spread across the landscape. NASA

When this happens, the warming of the air by sinking alone can be further intensified by the ground heating the air – which is especially powerful if the ground was already dry. In the northwestern US and western Canada, heatwaves are compounded by the warming produced by air sinking after it crosses the Rocky Mountains.

This leaves two questions: what makes a high-pressure system, and why does it stop moving?

As we mentioned above, a high-pressure system is usually part of a specific type of wave in the atmosphere – a Rossby wave. These waves are very common, and they form when air is displaced north or south by mountains, other weather systems or large areas of rain.

Rossby waves are the main drivers of weather outside the tropics, including the changeable weather in the southern half of Australia. Occasionally, the waves grow so large that they overturn on themselves and break. The breaking of the waves is intimately involved in making them stationary.

Importantly, just as for the recent event, the seeds for the Rossby waves that trigger heatwaves are located several thousands of kilometres to the west of their location. So for northwestern America, that’s the western Pacific. Australian heatwaves are typically triggered by events in the Atlantic to the west of Africa.

Another important feature of heatwaves is that they are often accompanied by high rainfall closer to the Equator. When southeast Australia experiences heatwaves, northern Australia often experiences rain. These rain events are not just side effects, but they actively enhance and prolong heatwaves.

What Will Climate Change Mean for Heatwaves?

Understanding the mechanics of what causes heatwaves is very important if we want to know how they might change as the planet gets hotter.

We know increased carbon dioxide in the atmosphere is increasing Earth’s average surface temperature. However, while this average warming is the background for heatwaves, the extremely high temperatures are produced by the movements of the atmosphere we talked about earlier.

So to know how heatwaves will change as our planet warms, we need to know how the changing climate affects the weather events that produce them. This is a much more difficult question than knowing the change in global average temperature.

How will events that seed Rossby waves change? How will the jet streams change? Will more waves get big enough to break? Will high-pressure systems stay in one place for longer? Will the associated rainfall become more intense, and how might that affect the heatwaves themselves?

Our answers to these questions are so far somewhat rudimentary. This is largely because some of the key processes involved are too detailed to be explicitly included in current large-scale climate models.

Climate models agree that global warming will change the position and strength of the jet streams. However, the models disagree about what will happen to Rossby waves.

From Climate Change to Weather Change

There is one thing we do know for sure: we need to up our game in understanding how the weather is changing as our planet warms, because weather is what has the biggest impact on humans and natural systems.

To do this, we will need to build computer models of the world’s climate that explicitly include some of the fine detail of weather. (By fine detail, we mean anything about a kilometre in size.) This in turn will require investment in huge amounts of computing power for tools such as our national climate model, the Australian Community Climate and Earth System Simulator (ACCESS), and the computing and modelling infrastructure projects of the National Collaborative Research Infrastructure Strategy (NCRIS) that support it.

We will also need to break down the artificial boundaries between weather and climate which exist in our research, our education and our public conversation.