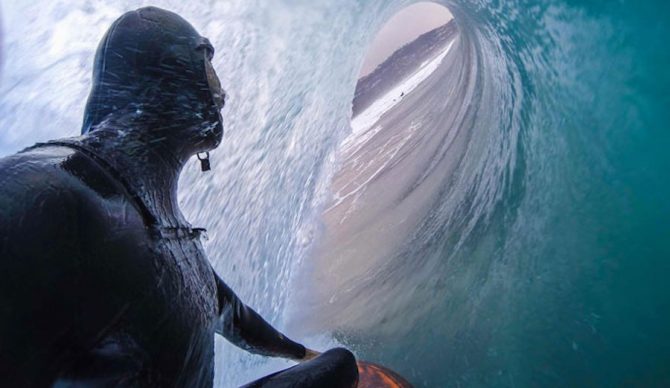 Cliff Kapono will spend the next 9 months traveling the world to discover whether surfers around the world are covered in unique bacteria that support their wellbeing. Photo: UC San Diego

To most surfers, the next nine months of Cliff Kapono’s life would sound like a dream. He’ll be traveling to the UK, Ireland, Spain, Morocco, California, Hawaii, Chile, and Indonesia frequenting each region’s best surf spots. But Cliff’s dreams aren’t of scoring rifling tubes with no one out – at least not the primary ones. No, he’s sacrificing himself in the name of science.

More specifically, Cliff Kapono is hoping to better understand the types of bacteria that exist on the bodies of people with frequent exposure to and immersion in the ocean – in this case, surfers. Ocean water covers the skin, and enters the nose, mouth, ears, eyes of the average surfer day in and day out. The Surfer Biome Project hopes to understand how exposure to such bacteria impacts surfers, and how that varies from country to country around the globe.

For most non-scientists, the term bacteria conjures up images of infection and disease. (Case in point, hand soaps that market their ability to “kill 99.9% of bacteria”). But just as there are bad bacteria, there are good bacteria that support bodily function. The communities of bacteria, fungi, and other microscopic organisms are collectively referred to as microbiomes, and scientists are just beginning to understand how they impact the health of human beings and the environment.

Kapono’s research draws from a study that found molecular remnants of soap, sunscreen, and other products on the skin days after subjects bathed. In other words, on the molecular level, the human body is a product of its environment. How then, Kapono wondered, is the ocean impacting the chemical composition of surfers who immerse themselves in the water so frequently?

“Do surfers in California differ on a molecular level from surfers in Spain?” asked Kapono in an article published on the University of California blog. “If surfers have a unique microbiome or body chemistry, this could begin to facilitate new types of conversations about the ocean as a therapy, and as a result inspire conservation efforts to protect this valuable resource.”

Kapono’s research is at the cutting edge of understanding important questions about how the ocean supports human health, and how that varies around the world. He will also likely discover differences in exposure to bad bacteria in regions more susceptible to pollution and runoff. These findings may give scientists and ocean advocates a completely new realm of data from which to draw in order to promote policy initiatives that value our oceans.

The Surfer Biome Project represents a new frontier in scientific research firmly rooted in ancestral wisdom – the kind Kapono, a Hawaiian, is intimately familiar with.

“In Hawaii, surfing isn’t just about riding a wave, it’s about understanding the ocean, being in balance with it, and expressing gratitude,” explained Kapono.

This endeavor merges traditional western science with widely held spiritual and ancestral beliefs around the world that the ocean promotes human health.

Over the next 9 months, Kapono will travel solo around the world linking up with local universities and organizations to support his research including the Center for Environment and Human Health at the University of Exeter School of Medicine and Surfers Against Sewage in the UK.

As far as building partnerships on his journey’s subsequent legs, Kapono’s not worried.

“The surfing population is pretty close-knit,” he said. “It will not be difficult to find a spot where the waves are good and communicate that this is something that could potentially protect the ocean.”

To learn more about The Surfer Biome Project, check out the University of California’s feature here.