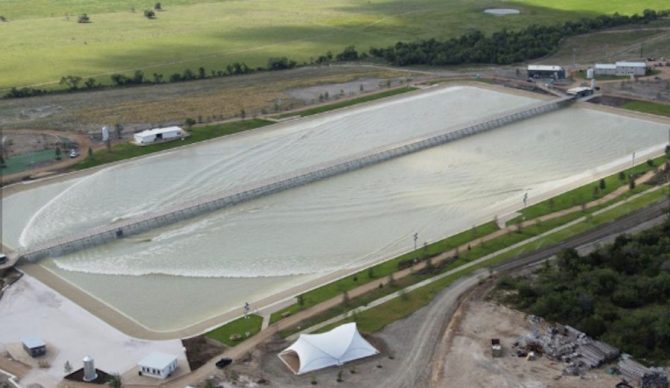 NLand Surf Park was set to be America’s first Wavegarden, pumping out artificial waves for the masses flocking to Austin, Texas. A week ago a major hiccup in the form of a lawsuit officially got in the way of that happening anytime soon. Before the suit was even properly filed NLand was hitting Travis County right back with a countersuit. Needless to say, it looked like the whole thing was getting messy real quick.

But what’s all the fuss over?

It turns out the source of the dispute between NLand and its host, Travis County, started with calling the lagoon a “swimming pool.” It’s also not a brand new dispute. The distinction between calling the Wavegarden powered lagoon a swimming pool or…a lagoon, is actually a big one. The pool/lagoon/thing is 45 times larger than an Olympic swimming pool, but state law requires it be filtered every six hours – something that would require some very, very large pumps. Filtration pumps large enough to suck up full grown human beings sound neither safe nor good for business, so park executives asked for an exemption from the pool classification in 2014. That was denied and county officials ordered NLand to stop construction last year, but construction continued. Earlier this year the county was given a 26-page report on the lagoon’s water quality, detailing the process of filling the body of water with clean rainwater. Since that report showed the “pool” wouldn’t have the required chlorine amount – something you’d be concerned about if this were in fact a swimming pool, county officials say no go. And that brings us to today, hashing out whether or not a 14-acre body of water constitutes a swimming pool or a lagoon.

An excerpt from NLand’s lawsuit gives the following argument:

“The six-hour turnover requirement is based on the capacity allowances and requirements for public swimming pools. Those capacity regulations would allow for 17,000 people to swim at one time in the NLand Surf Park lagoon. As it is currently designed and scheduled to operate, no more than 200 people will be in the lagoon at once. That occupancy — approximately 1 percent of what the regulations were designed to accommodate — abrogates the need to turn over the water so quickly.”