I Love Surfing, But a World without Music? 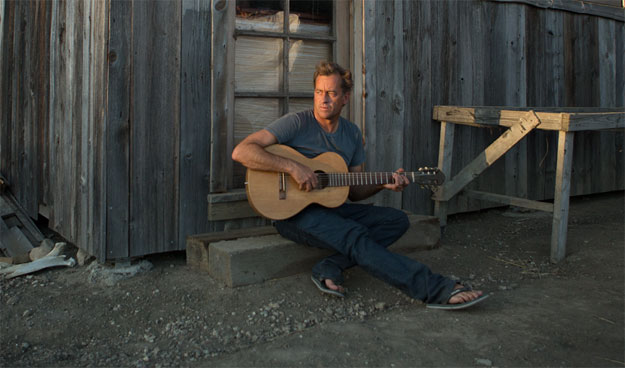 The cover of Tom Curren's most recent CD: In Plain View.

I Love Surfing, But a World without Music?

Editor’s Note: We linked up with Tom Curren on the phone to discuss a preposterous ultimatum: music or surfing? The three-time world champion and accomplished musician entertained the question thoughtfully. His perspective, and our conversation is transcribed below. -Zach

Part of me is thinking, surfing has given me so much, just to say that music is more important to me now…That’s kind of a big call, so I don’t know how to answer that. But at the same time, I just feel like with music I’m sort of somewhere that I’m kind of growing into more. Where with surfing I’m sort of maintaining. You know, I get a lot of enjoyment out of just being on the beach watching my kids surf. Sometimes it’s crowded, and I just enjoy more just watching surfing sometimes. So…theoretically I could trade my boards for my guitar.

It just so happens that I had a big career in surfing, so it’s a bit of a treacherous thing to say that I’d go with music. But I would say that music is more important than surfing, and so I would go with that.

Surfing for me it has these magical powers that make me feel good. And it’s given me so much. My friends. It kind of keeps me sane in a way.

But purely analytical…I’d say music is more important at this point for me. It’d be hard to imagine a world without music.

At this point, I mention that he’s in very different phases and levels of maturity with both pursuits.

If it was like that – where I had to walk away from surfing, I’d find something similar that has to do with nature and just getting out there. I know quite a few people that were really strong in surfing, but one day they just walked away from it. I find that kind of hard to fathom, but at the same time everything can become too important. Even surfing, God forbid, it can become too much of an obsession, and so at that point it takes a lot of guts to walk away from it. And so to say, “You know, this is great, I love it, but it’s just become too much of an obsession. It’s become too central.” And I know people where it just got to a point where they had to just take a step back. It was just too much. You get too involved, and your whole mood and your whole wellbeing is so dependent on being able to go surfing that – “Wait a minute, there’s something wrong with this picture.” And so they were able to do something else. Just because it becomes too important.

And I guess music has this kind of power when it’s in the right context, I think it has more far-reaching positive effects overall for more people, and it’s more of a  collective thing. It’s more of a thing you can share with people who may be completely different, and so surfing is a little bit of an exclusive club in a way – even geographically, I suppose. Not so much because it’s expensive or anything like that. It doesn’t really cost that much.

I think it’s a great question. It brought me to a lot of thinking. Because I guess, for me, I’m still chasing waves. And I love it. I love being able to travel. If I wasn’t able to do that, I don’t know…to travel and surf, it’d be really hard for me. That’s post-career and stuff. I’m just lucky enough to be able to still do it.

But it’s a limited resource for one thing. It’s getting more crowded. More and more people are learning to surf. So I could say, yeah, let the kids have it, you know? And move on. But it’s easier said than done.

It’s kind of like trying to choose between blindness and deafness. At the same time it’s a really good question, but it’s also a really stupid one as well. Totally useless, you know. But yeah, you know, the good part about the question is, “What if you couldn’t surf?” What if you had an accident? I know guys that have been paralyzed, and they still get out there and surf. It’s such a part of them. And I dig that. But I guess because I’ve had a really good shake with the sport of surfing, it’s like, “Okay, well, what if, you know?” And that’s just where I’m at right now. And it may be seen as treason or something, but, you know, I’ve been involved in music since a really young age too. I had times when I was little when I’d go to a surfing contest and get back and go to choir practice later on at night. At that point, when I was 14, surfing was way more important.

The phone cuts out. I freak out for a millisecond, and we reconnect.

I ask him to talk more about the idea of quitting after achieving at the pinnacle of sport. How Greg Noll hung up his trunks. How Gerry Lopez moved to Bend, Oregon. How it’s possible to transition to a new infatuation or passion.

You move on, you know. You’re right. And I think that sort of shapes what I’m trying to express a little bit. I’m not really going to exceed what I’ve done in surfing, probably. Although I won’t say for sure. Who knows? I feel like my level is really good right now, but I probably won’t be able to exceed what I did. And so what’s the point of going after perfect and finding waves even though you’ve gotten the most perfect waves you’ve ever had?

The further along you go, and the more you accomplish in one thing or another, you reach a  peak at some point. And you think about it – you’re just trying to recreate that magic, and it becomes harder and harder.

And one guy who surprises me still with his enthusiasm just to surf and just to chase a swell and the capacity to maintain that excitement is Kelly. He just loves surfing more than anyone I know. And I don’t have it at that level. I have it, but I like it when I’m at home and when the waves are really good at home, particularly. Because we don’t get waves all the time, so for me that’s really special, and I really enjoy surfing Sunset Beach. To say you couldn’t do that anymore is pretty hard.

But you’re asking that question to someone who – I think I’ve been at the peak of what I can do in surfing. And without a challenge and without a real goal in the sport, a certain part of it just isn’t as rewarding as it used to be. It still is. Don’t get me wrong. So I think your question raises more questions that it answers.