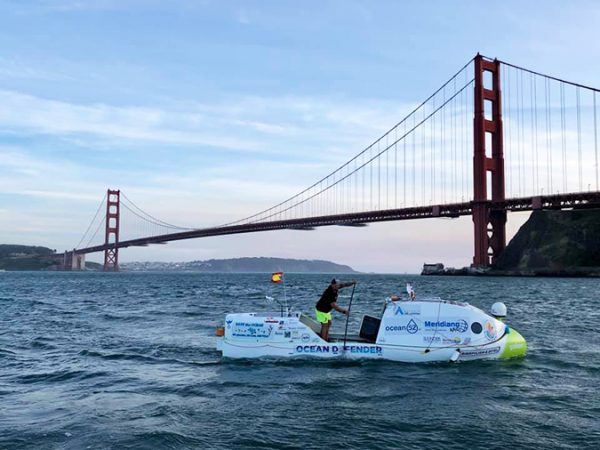 Antonio De La Rosa, who turned 50 while paddling between San Francisco and Waikiki, completed his arduous journey on Saturday after finishing the 2,900-mile voyage. He was the first stand-up paddler to complete the trip and used a large, boat-like SUP similar to the craft that Chris Bertish used to cross the Atlantic in 2017.

De La Rosa started June 4 and reportedly paddled 76 straight days to complete the project, sleeping in the customized hull of his SUP where he kept supplies for the trip. He named the boat, “The Ocean Defender,” tagging the mission to raise awareness of man-made pollution in the sea. But the journey took a lot out of the Spaniard endurance athlete, a test of “absolute loneliness and self-sufficiency” as he put it.

According to reports, the most harrowing part of the journey for De La Rosa was as he crossed between Molokai and Maui, a notoriously windy channel and one that hosts a downwind race each summer prior to the Molokai2Oahu event. De La Rosa wrote that things were dicier than he may have anticipated during the final stretch as he worked to stay on course. “I barely slept for the concern of not staying short or passing long on the diagonal of #molokai to #Oahu,“ he wrote in Spanish.

De La Rosa is the first SUP paddler to make the crossing but he’s not the first paddler. In a legendary crossing, Californian Ed Gillet paddled from Monterey Bay to Maui in a custom sea kayak. During the 1987 expedition, he apparently ran out of food and had to eat toothpaste. Several other kayakers have tried the project but failed, often miserably.

Making it safely is certainly one of the many reasons for De La Rosa to celebrate his feat. “No doubt last day I step in the water,” he wrote during the final hours of the trip. “What an emotion.”