8 Regions for Planning the Most Epic Surf and Wine Trips 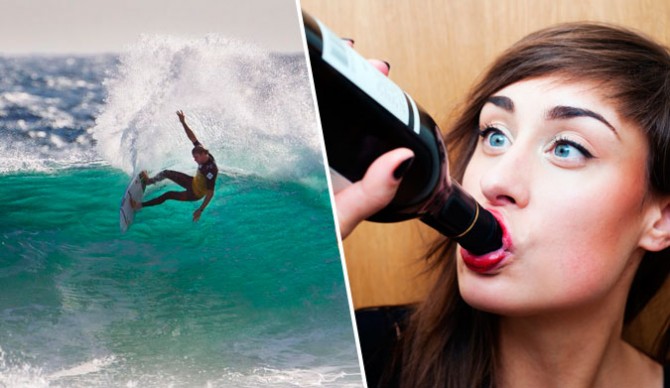 My first love was riding waves. My second was wine. The good thing about falling head over heels for surfing and wine: These two passions pair perfectly.

Combining surfing and wine tourism provides a unique way to immerse yourself into a specific place, its land, its sea, and its culture. I’m a true believer that one of the best ways to fully appreciate a new place is to taste the wine that comes from its earth. A similar dynamic unfolds in surfing, too. Only by paddling out at a break can you begin to fully understand it. The same climactic elements that cause swell affect coastal winegrowing. Influences from the ocean, combined with coastal fog or mountain ranges, leave their signature in the finished wines. Traveling for surf is about discovering the natural elements that make a place unique. In case you haven’t noticed the theme here, the same can be said for nature’s impact on wine.

Lumping wine tourism together with surfing is also a great way to keep non-surfing travel partners happy. Taking in gorgeous scenery with a glass of wine is a universal joy. If there are vineyards nearby, they are more than likely located in the midst of some gorgeous terrain. The best wines come from fascinating, unique, beautiful places, which makes wine tourism a ton of fun. I think it’s fair to say the absolute greatest wines in the world come from places that are not actually close to surf (France’s Burgundy, Champagne and Northern Rhone regions, Italy’s Piedmont, for example). But epic surf and epic vineyards do go hand in hand all over the globe.

A lot of people involved in coastal wine industries also surf. Wine people are some of the only people as obsessed with weather patterns as surfers, and a passion for nature is just one of many things I’ve found in common with grape growers and winemakers.

I haven’t had the privilege of touring all of the following wine regions yet. But I’m versed enough in their wines and have researched their waves enough to know you could pair the two for an epic surf trip. Also, I abide by the commandment “Thou Shalt Not Name Specific Surf Spots Unless They Are Already World-Famous,” so that research is up to you. But if you time it right in one of these regions, you shouldn’t have any problems getting waves with your vino. 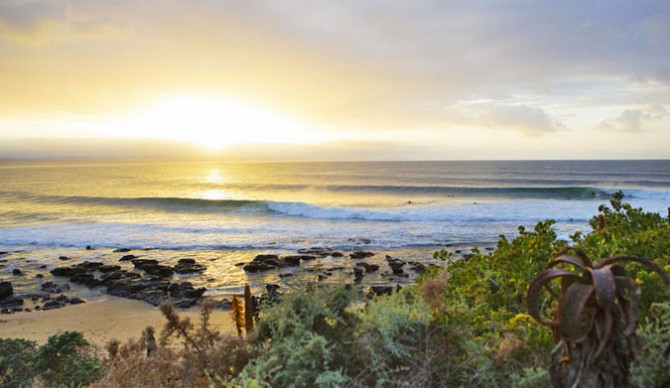 Cape Town was top of my bucket list for years, so I had the highest possible hopes when I made the trek back in 2014. The trip, the wines, and the surf blew away all my expectations.

The coastline overflows with a dizzying array of kelp-laden reefs, secret slabs, point breaks, wedging beachies. If you go in the winter (which I did), the problem won’t be finding surf but figuring out how to survive it. I caught some of the best waves of my life on this trip, witnessed some of the most serene and gorgeous lineups as well, and got absolutely worked on more than a few occasions. The locals were awesome and welcoming to this American East Coaster, and the same goes for the people I met at South African wineries. For your dollar, South African wines are some of the best you can find on the planet, so save some room in your luggage to bring back a few special bottles.

If you’re really adventurous, head east along the southern coast of Africa for more crazy, cold waves. Hermanus is an incredible area for surfers and it’s close to the epic Chardonnays and Pinot Noirs from Hemel-en-Aarde and Walker Bay. 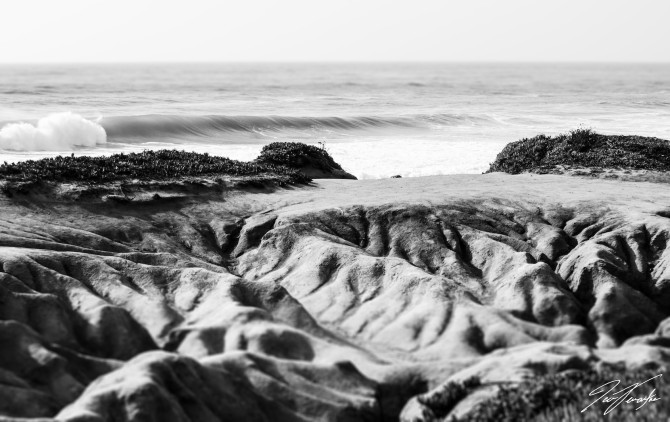 This one is obvious. I’ve been on about a dozen wine and surf trips all over California and I am always planning my next one.

From Santa Barbara to way, way north of San Francisco, there are waves (and wine) all over the Golden State. Even San Diego surf spots are close to some interesting wine country (Temecula). Some of my personal favorite California wines come from Sonoma and Mendocino. These regions dole out hearty surf along with some raw, rugged, cold, intense coastline. Come prepared and trained, though, and maybe don’t charge it hard if you’re nursing a wine hangover. My sessions in Northern California have been humbling and, occasionally, terrifying.

I made a surf pilgrimage to Santa Cruz last year during a big-ass swell. I got in way over my head, but it was an incredible experience. Nearby wineries in the Santa Cruz Mountains produce some of my favorite Pinot Noirs and Chardonnays in the state. And then there’s Monterey, Santa Barbara, San Louis Obispo, to name a few. Of course, Napa is California’s wine capital. It’s not impossible to fit a morning of waves in before driving inland to Napa wine country for an afternoon of tasting.

I could take surfing and wine trips in California every month for a lifetime and never get bored.

My advice: Surf from dawn ‘til noon in hopes of smaller crowds and clean offshores. Then, head inland to some wineries. If you do this and don’t wind up in a state of bliss, well, I have nothing for you. 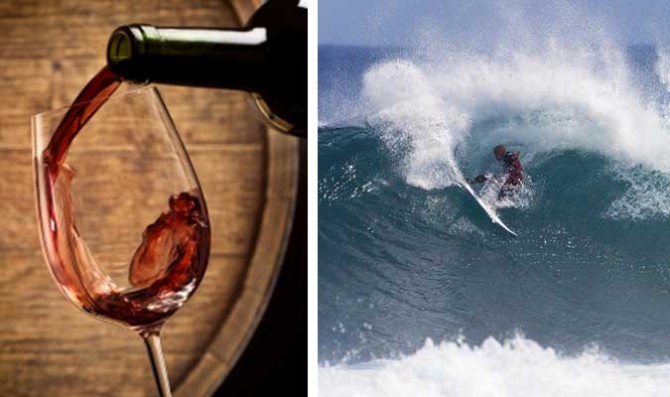 Aussies, I apologize for lumping your entire country into one category, but there are just too many incredible regions that are home to both great surf and wine, and I didn’t want to leave one out.

My first stop on an Australian wine/surf trip would be West Oz. I’ve always been thrilled by the remote, raw beauty and surf. I watch the Margie’s WSL event every year and drool. I dream of long drives from Perth, checking out the surf around every corner. And the wines from the Margaret River region are amazing.

If you’re hitting up a surf trip to New South Wales, you have to check out aged Sémillon from Hunter Valley and the killer Shiraz and Riesling coming out of Canberra. South Australia? Barossa Shiraz, Clare Valley Riesling, McLaren Vale Grenache, etc. Victoria is home to more than epic point breaks. The Pinots and Chardonnays from Yarra Valley and Mornington Peninsula are stunning, too. 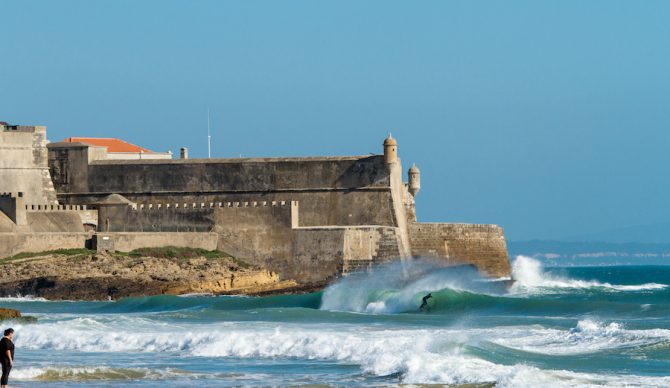 We all know Portugal — Nazaré, Supertubos, that funky Lisbon wedge. The coast is an embarrassment of surfing riches and Portugal is such an incredible wine-producing country. Look at a map of Portugal and just pick a spot. You’ll find both waves and wine within driving distance.

Lisbon is the epicenter of the food and wine scene in Portugal, and the Lisboa region north of the city boasts a lot of wineries (and waves). And that’s just the mainland. I spent a week wine tasting and touring the Portuguese island of Madeira (located off the coast of Africa), caught a few waves and saw some incredible lineups. Madeira produces some of the best wines in the world. 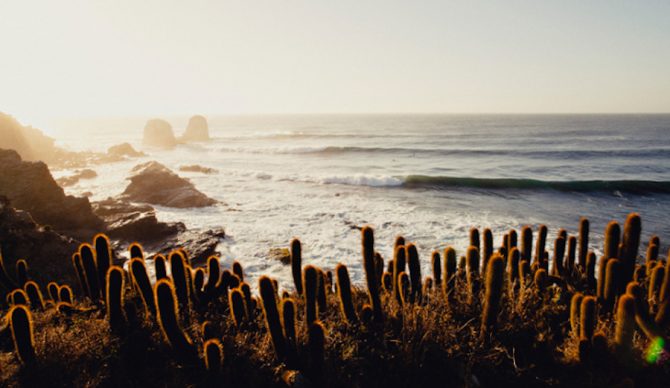 From Big Wave World Tour stops to epic bodyboarding slabs and more beginner-friendly spots for mortals, Chile is a massive freak of nature. Spanning more than 2,500 miles along the Pacific, the key to a Chilean surf and wine trip is coming up with a manageable itinerary.

What makes Chile different from a lot of other coastal wine regions is the proximity of the massive Andes Mountains. The elevation jacks up quickly as you move inland, and many of the wineries are located in high elevation areas where vines get a great plenty of sun combined with cooling mountain air and large diurnal temperature swings. If you’re into surfing, mountaineering, and vino, Chile is paradise.

From Elqui Valley in the north to Malleco Valley in the south, Chile is loaded with vineyards that produce some exceptional (and frequently well-priced) wines. Santiago, the capital and by far largest city, is a bit north of smack-dab in the middle of the country’s wine lands and close to the coast. There are seriously good wineries located within less than two hours from the center of the city. 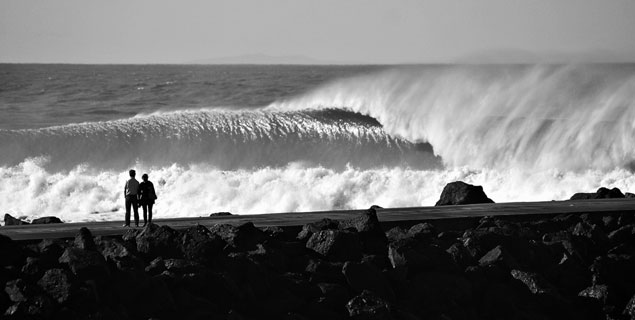 I’ve been obsessed with French beaches since I saw those topless ladies and pumping surf in Endless Summer II. These hollow sand bars are good enough to garner a stop on the World Tour, which is one of my favorite events to watch.

There are some incredible wine regions located not far inland. Bordeaux is home to some of the world’s best (and most expensive) wines. But it’s not all three-piece suits, massive chateaus, and money. There are some seriously solid Bordeaux wines at reasonable prices that are classified as “Crus Bourgeois.” Plan ahead, contact someone at the chateau, and try to set something up. Just know, it’s not the type of place I’d expect a gracious welcome after rolling up in board shorts and flip-flops.

But there are far lesser-known and smaller wine regions that are even closer to the best breaks. Jurancon, at the foothills of the Pyrenees, is a fascinating place that produces incredible dry white wines and some unique sweet whites as well. Irouléguy vineyards are located on super steep slopes in French Basque Country. These hidden gems are further off the beaten-path and you might be able to meet the winemaker and hang out, which is not something you’re likely to pull off in Bordeaux. 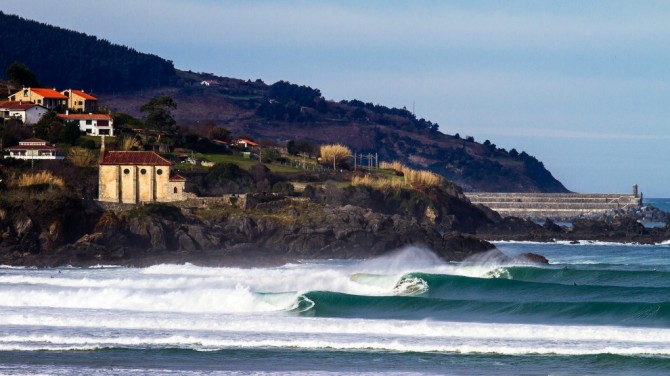 If you’re in Southwest France, you could combine a trip to Northern Spain. I’ve watched way too many clips of Basque Country slabs with my mouth wide open. The Bay of Biscay is the recipient of all kinds of insane swell, which filters into all the nooks and crannies of the Northern Spanish coastline.

Spain is also the world’s third largest wine-producing country. There are vineyards everywhere. If you’ve worn out your legs at Mundaka, you’re only about 40-50 miles from La Rioja, the historic Spanish wine region where the red Tempranillo grape reaches its highest potential. Castles, vineyards, old cellars, incredible wines and food, Rioja offers it all. With all the history and culture packed into this region, I can’t imagine having anything less but a stellar time after a surf session.

The coastal town of Bilbao, surrounded by surf, is also home to Txakoli, a funkily-spelled yet delicious white wine that is high in acidity, low in alcohol and perfect with seafood. A lot of these vineyards are easily accessible from the coast and offer stunning views of the ocean. 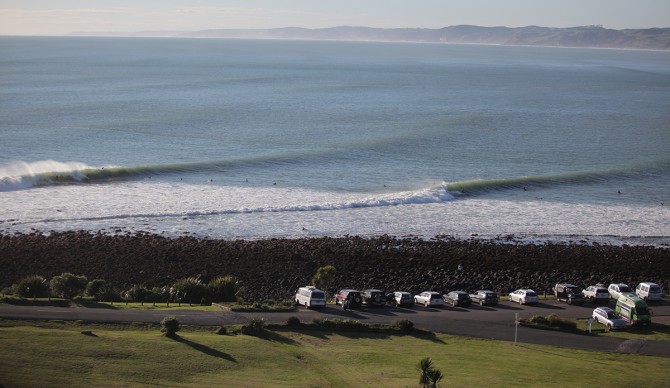 I haven’t made this trip yet but I’m a huge fan of wines from all over New Zealand. On the Pacific side of North Island, you’ve got awesome Chardonnay from Gisborne, diverse reds from Hawkes Bay and plenty of delicious Pinot Noir from Martinborough. The South Island is home to Marlborough’s famous Sauvignon Blancs and some good Pinots come out of Canterbury, further down the coast.

New Zealand has more swell than the average traveling surfer could ever know what to do with. You have two islands to choose from and two seas, the Pacific Ocean and the Tasman Sea. Doing New Zealand proper requires research, long (but epic) drives, and some local knowledge and connections.

Editor’s Note: This goes without saying, but don’t drive while drunk. Get your waves, enjoy your vino, and please, stay safe.