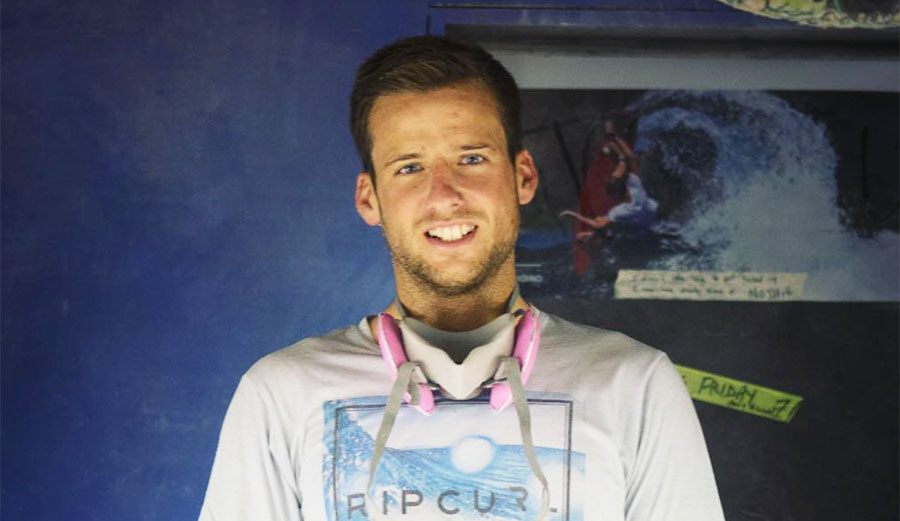 “He was a good, godly, humble man who deserved many, many more laps around the sun and many more good waves.” Photo: Ben Kelly Surfboards/Facebook

At around 1:30 p.m. on Saturday, May 9, Ben Kelly was attacked by a shark while surfing. A great white, thought to be 10-to-12 feet in length, bit his right leg. The wound would prove to be fatal, and the 26-year-old shaper was tragically pronounced dead at the scene. The news shook his friends, family, and everyone who knew him to their cores, and it was met with an outpouring of grief and support.

The incident, which was the first fatal shark attack in California since 2012, occurred at Manresa State Beach, half-an-hour south of Santa Cruz. According to reports, the attack happened within 100 yards of the shore.

Ben, who moved to Pleasure Point from Orange County three years ago with his wife Katie, had made a name for himself in the surfboard shaping community. They made the move because Santa Cruz was a sort of midway point between Katie’s home in Oregon and Ben’s home in San Clemente.

“Why do I shape surfboards? Well… it’s something I’ve done since I was a kid,” Ben wrote on his website. “A sort of escape from an overly-productive world to a simpler more creative space! What started as a way to fuel my own surfing passion has now become a way to stoke out my fellow surfers, and that is truly fulfilling to me. It’s the way I have found to give back to others.”

On May 21, over 300 people attended his memorial paddle-out in San Clemente, where Ben first began surfing. I talked with four of his friends, Paul Keating, Johnny Brewer, Brock Eissman, and Kyle Ransom, after the paddle out. They were sitting in the back of Kyle’s van telling stories about Ben.

“It was pretty rad, man,” said Paul Keating, who went to school with Ben at Vanguard University. “There were a lot of people on the beach. Helicopters were in the air, the news was there, the whole family was there. A microphone was set up and both families said some really nice words. Katie was there. She told a story about how the last three months of their marriage were the best. They got to check off the North Shore from their bucket list. They also took the last week of Ben’s life off work and adventured every day. Then a bunch of people paddled out, the rest of the people went to the pier. It was beautiful.”

After the speaking was done, the paddle out turned into something that Ben would have appreciated. “The speaking was sad,” Keating said, “but the paddle out turned into a complete celebration. A set rolled through and all of us party-waved. There were at least 30 or 40 people on it. It was straight chaos; it was beautiful, just like Ben would have wanted it.”

Ben was an active person. In his freshman year, he set up the Vanguard Surf Club, organizing beach days. “He was a real legend around campus, that’s for sure,” Keating continued. “Ben’s the guy. He’s the type of friend who has no problem telling you if something’s a bad idea. He’ll give you his honest opinion. He’ll be there in tough times and help you work through them. He was always there to have a great time doing absolutely nothing, too. He had so much energy, you know? Real stoked all the time. Such contagious energy.”

It was recently announced by The Santa Cruz County Board of Supervisors that May 21 would be “Ben Kelly Day,” which is also his birthday. The guys in the van had just heard the news when I spoke with them, and they erupted. “I just heard today that they’re making a freaking Ben Kelly Day,” Kyle exclaimed, his voice echoing off the van’s metal interior. “They already got it passed in Santa Cruz. They have a freaking Ben Kelly Day!”

Ben was a devout Christian who was devoted to his faith. “He was always a solid believer,” Keating explained, “but more than that, he was willing to talk with anyone, no matter who they were. He was such a great guy.”

Some of Ben’s close friends set up a crowdfunding campaign to support his wife. At the time of this writing, it’s raised over $135,000. In it, one of them wrote a touching tribute that addressed Ben’s devotion to God. “The most memorable thing about Ben was his unashamed, unrelenting passion for his faith and his relationship with Jesus,” he wrote. “I don’t say this to somehow selfishly reassure myself or others that he’s passed on to Heaven. I don’t have to wonder whether he knew Jesus, or whether his faith was secure. It was. Everybody knew it. He truly lived his faith out. In nearly every conversation I ever had with him, he tied God and the redeeming love of Jesus into it. He was a good, godly, humble man who deserved many, many more laps around the sun and many more good waves.”