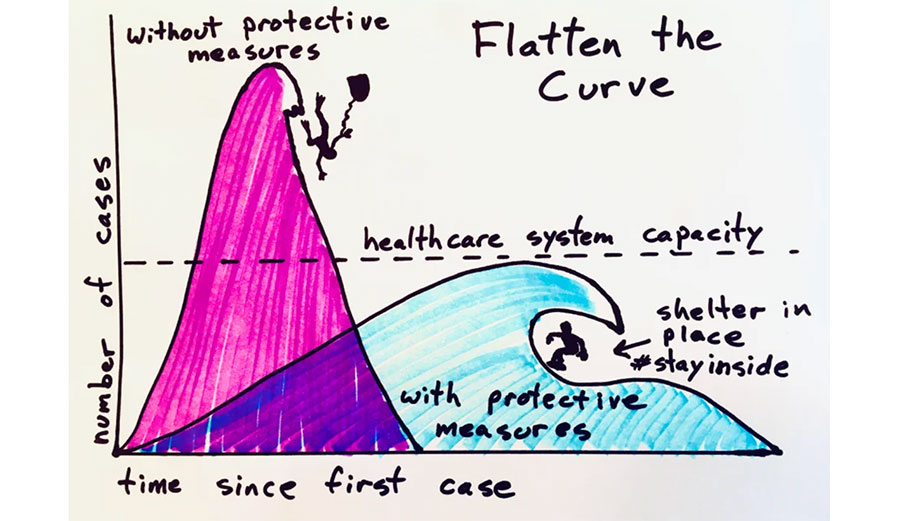 By now, you’ve heard the term “flattening the curve.” It’s an important part of pandemic response. It’s pretty obvious why it works and how: distancing eases the stress on the healthcare system, which in turn lets healthcare workers actually provide healthcare. Hospitals run out of beds and basic supplies needed to treat sick people if they’re inundated by enormous numbers of patients suffering from the virus.

While a flatter curve assumes the same number of people will get sick, the sickness is spread out over time. Charles Bergquist, director of the public radio science show Science Friday tweeted out a simple explanatory metaphor: “Your workplace bathroom has only so many stalls,” he wrote. “If everyone decides to go at the same time, there are problems. If the same number of people need go to the restroom but spread over several hours, it’s all ok.”

It’s likely you’ve seen the illustrative graph floating around the internet, but Reddit user Darth_Voter did a little customization for the surfing public, as you can see above.

The curve refers to the projected number of people who will get Coronavirus over a period of time. It’s not a hard prediction, as that would be impossible, but a theoretical number that is used to model the spread of the virus using the numbers that researchers know.

For a glimpse into a possible near-future if everyone ignores the directive to stay away from other people as much as possible, one needs only to look to the rest of the world. In less than a month, the global number of Covid-19 cases has increased exponentially. If you’re young and healthy, you’re less likely to have severe symptoms, but that’s not what you should be concerned about. No matter how healthy you are, you could potentially give it to someone who isn’t. As of March 15, there are more than 153,000 cases around the world. The rate of infection is scary-fast — in Italy, for example, confirmed cases doubled from 10,000 to 20,000 in just four days.

Health officials aren’t under the illusion that this will all blow over, either. Panic is never the answer, of course, but isolation whenever possible is, so take the advice of the diagram above and help flatten the curve.