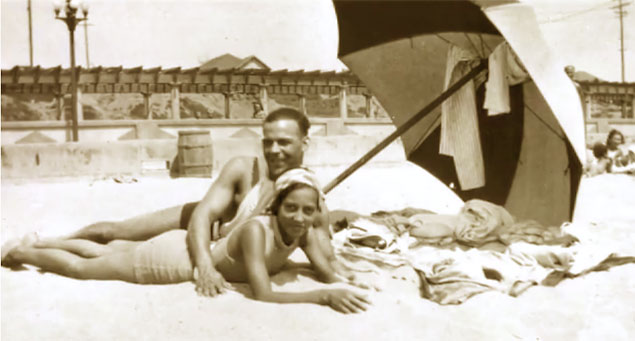 Of the many obstacles that Black swimming culture still faces, perhaps the most daunting, is the very notion that it does not exist: that a Black person enjoying the water is anomalous. Because, in fact, it has existed all along. Photo: Courtesy 12 Miles North

In the great and varied canon of American racial stereotypes, there is a highly detailed list of segregated sports. Basketball, for instance, is a “Black” sport. Hockey, on the other hand, is for Whites. Surfing falls firmly into the category of “white sport,” somewhere between mountaineering and golf. It could be argued that there is no “whiter” sport in the world that was originally invented by non-whites. There are many ways to illustrate this, but let’s leave it here: It is the only sport since the 1936 summer Olympics in which the 2009 world champion, Mick Fanning, can say something overtly anti-Semitic to a reporter and the outlet that reports the statement will be blamed for bad taste.

Why don’t Black people surf? That can be answered with another race-based generalization. Black people don’t swim. Consider the numbers: A 2010 study by US Swimming, America’s governing body of competitive swimming, found that nearly half of White children (42 percent) had low or no swimming ability. That number was topped by Hispanic American children; 58 percent of whom reported no or low swimming ability. Black children had the highest non-swimming rates at just under than 70 percent. I suspect that the White numbers are slightly inflated based on the fact many that my Caucasian, land-lubbing friends define “swimming” as walking into a pool up to their waist, getting out, then applying more coconut oil. But that doesn’t change the fact that swimming rates among Black children are abysmal. Infinitely more worrisome is that Black children are around three times more likely to drown than White children, based on another study by US swimming, which is apparently the only organization who studies these sorts of things.

There is one problem with these studies: although the numbers are correct, the conclusion that we causally draw from them is utterly corrupt. The numbers tell us that many Black people don’t swim; Our interpretation, however, is that Black people are not swimmers, which is wrong. The truth is that American Blacks have a long and well-documented history of loving to swim. In order to understand why African American culture does not currently enjoy a well established culture of recreational swimming, we need to delve under the stereotypes and generalizations and look at the history of exclusion that has accompanied their efforts to access the water.

“There were two periods of time in 20th century in which swimming became popularized and democratized in the US,” says Jeff Wiltse, author of the book Contested Waters: A Social History of Swimming Pools in America. “The first was in the 1920s and 1930s. That’s really when swimming as a recreational activity became popular in US. The vehicles of this popularization were the swimming pools being built in inter-war period. However, it was during that time that blacks were being denied access or relegated to pools that couldn’t accommodate very many people or were generally less desirable.”

Wiltse’s book deals with the complex web of segregation that enveloped Black Americans upon their emancipation form slavery. In this web, the municipal swimming pool became ground zero for Jim Crow. When the first pools opened in cities like Philadelphia in the late 19th century, they were considered to be public baths and located in a low-income neighborhood so that people without access to running water could clean themselves. These pools were segregated by sex but integrated as far as race was concerned. One of the first pools to combine the sexes was the Fairgrounds pool in St. Louis, which opened to great fanfare in 1913. By then, the swimming pool had turned from a public hygiene project into a coveted leisure space, which was quickly becoming an American institution. At 440 feet in diameter, the circular Fairgrounds Pool was the largest in the country by a country mile. It was ringed by an artificial sand beach and had an inclined bottom that mimicked the gradual deepening of the sea floor. The recreation department even considered putting a wave machine in but nixed the idea because it was too expensive. On hot summer days, thousands of people packed into the pool. None of them were Black. This was not for lack of desire on the part of Black residents of St Louis. Instead, the pool was forcibly, and at times violently segregated because city officials didn’t want black men interacting with white women in such an intimate space. Wiltse cites the Fairground pool as “one point of origin of the mixed-gender, racially segregated leisure society that came to predominate during the twentieth century.” The fear of black men interacting with white women in swimwear kept pools firmly segregated until the mid 1950s.

When some Black people began to resist the race barrier, either through lawsuits filed with the backing of the NAACP or through actually entering a pool and trying to swim, they were often met with a host of legal tricks, violence, or a combination of the two. A common way of segregating a pool was for the city government to lease the pool to a private company to operate. Although the government couldn’t legally segregate, a private company could make whatever rules it wanted.

In smaller towns, they would often promise angry Black communities their own swimming pool for years without delivering. In 1942, Montgomery, West Virginia closed its only municipal swimming pool for four years instead of permitting interracial swimming. When the Fairground Pool was desegregated in 1949, five thousand White people rioted and indiscriminately beat any Black person they could get their hands on near the park where the pool was located.