Heal Your Election Woes By Embracing Women, Diversity, and the Environment

A week ago we believed we were moving forward. We knew Titans of Mavericks would add a women’s heat to the 2016-17 contest, which was momentous, even if they did so under pressure. We were confident we’d elect our first woman president, a historic occasion, even if many voters were marking their ballots reluctantly.

But then the committee responsible for choosing the surfers for the women’s heat pointedly left out Bianca Valenti, inarguably one of the most charging of the women who surf Mavs – and definitely the most outspoken about the need to include women in the contest. Those of us who’d supported women’s inclusion groaned at what could only be read as a deliberate exclusion of the most qualified potential contestant.

And then America voted into office a man who, in addition to running on a platform of racism and calling climate change a Chinese hoax, has a long history of demeaning and allegedly assaulting women. Those of us fighting to preserve our planet, who believe in access for all, in both environmental protection and social justice, felt the ground vanish beneath our feet.

For a while, despair overwhelmed the social media feeds as those on the side of good freaked out at what was happening. The thing about being an activist, however, is the “active” part – sooner or later despair propels you to action. Energy gathers, the swell builds. And so after the initial round of “What do I tell my children?” the question, “What do we do now?” broke across Facebook, Twitter, emails, websites.

You know how it is: In action, there is hope.

Here are three ways to reject despair and instead manifest your support for access equity, equality, social justice, our ocean, beaches and waves: 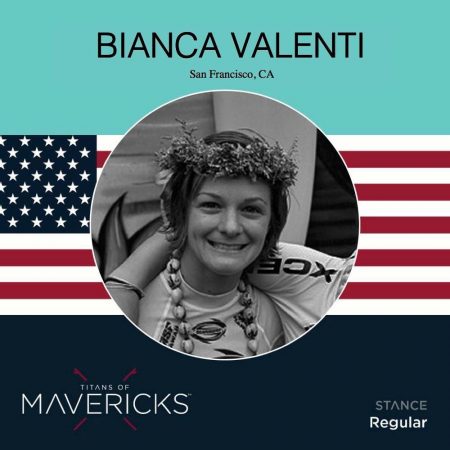 1. Support the fight for access equity as guaranteed under California’s Coastal Act by signing “Stand With Bianca,” a petition seeking to ensure Valenti’s inclusion as a competitor in the Titans of Mavericks contest. Those who advocate for the rights we all share deserve commendation, not preclusion. From Margaret Seelie, founder of the OTHER Project and journalism instructor for Sea State:

Bianca said in a recent interview, “Someone had to take one for the team,” and after last nights presidential election I feel that Hillary may be doing the same; taking this loss with grace to pave the way for future presidential candidates who break the mold by being female, gay, transgender, or LGBTQI. When I see a comment like this posted by a man, “I’m signing because nobody deserves to surf in the Titans of Mavericks event more than Bianca,” it gives me hope that one day we will all truly stand together for the greater good. 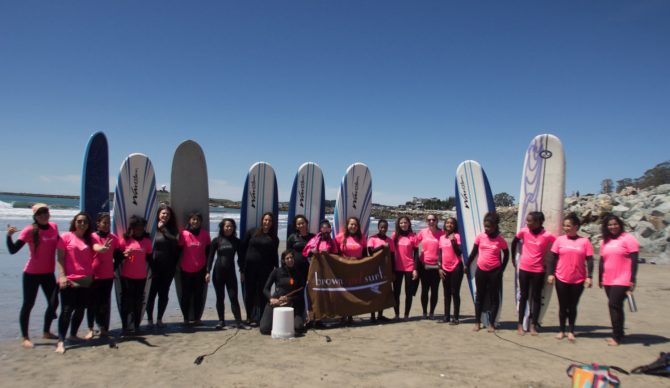 2. Rebuke the election results by declaring your support to women, diversity and the environment via Brown Girl Surf, an organization working to “build a more diverse, environmentally reverent, and joyful women’s surf culture by increasing access to surfing, cultivating community, amplifying the voices of women of color surfers, and taking care of the earth.” If you’re anywhere near Half Moon Bay (home of the Titans of Maverick’s contest, of course) they’re throwing a party Saturday night with a showing of the epic new surf flick “It Ain’t Pretty” featuring the women who surf San Francisco’s Ocean Beach, including and starring Bianca Valenti. Can’t make the fundraiser? Donate on the website. It Ain’t Pretty filmmaker Dayla Soul notes:

“It’s been an awsome journey to collaborate and unify in this movement for equality in women’s big wave surfing. I’ve seen our conversations and efforts flow into the wider world, using surfing as a metaphor to inspire young women to reach for even higher grounds. Now more than ever we need to embrace each other and stand by each other for what’s right and for what’s possible – even when it’s not popular. Sometimes when it looks like we have failed, we find it was only a detour to a new beginning. Bianca Valenti is our champion in having the courage to move forward. However without the efforts of all the women behind her, it wouldn’t be a movement.”

3. Join the Surfrider Foundation. Our grassroots model is now more important than ever – we’re at 41 national victories this year alone, proving what our activist network can do when motivated and supported. We have so much more to do – and a whole new level of fight to fight – to defend our hard-won progress and protect our planet, our ocean and coasts. Look, Drumpf – President Drumpf – just chose the “leading” climate change skeptic to head the EPA transition. Sea level rise, coastal preservation and adaptation aren’t issues that are going to wait until smarter thinking prevails. We can’t let our beaches and coast vanish in the meantime.

Finally, a last bit of inspiration and much-needed joy for your day, courtesy Margaret Seelie: