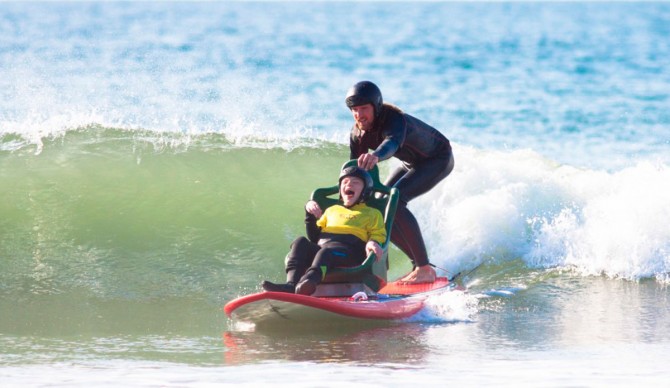 Kai Lewis, happy as a clam.

Moments after riding his very first wave, Kai Lewis was captured wearing that ear-to-ear smile only a surfer can understand. There was, however, a lot more than usual that led up to that incredible moment down at Llangennith Beach in South Wales, UK. Over a year’s worth of innovation and problem solving, a heartwarming tale of kindness and charity, and, most prominently, Kai’s own determination to overcome his fears and experience the joys of surfing, all aligned to create one magical moment after another.

Kai suffers from severe cerebral palsy, a movement disorder which affects his entire body. For over a year, Kai had been attending sessions at Surfability, a locally run non-profit charity that makes surfing accessible for children with physical and mental disabilities. However, Kai’s condition means that he’s unable to both sit or lie flat on a board unaided. Paddling on a tandem board on flat water was a challenge. Even catching small waves required a team of three volunteers in order to safely make surfing happen. 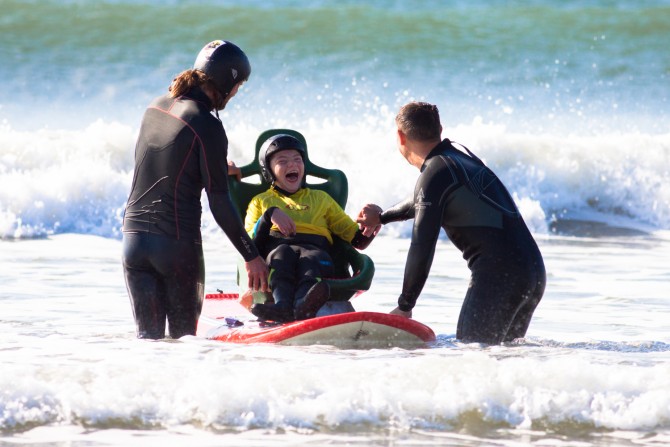 “Kai was so desperate to surf, but at the same time the instability of even our biggest boards was making him really nervous,” says Ben Clifford, Head Coach and Founder at Surfability. “We started looking around for solutions to make the experience more enjoyable for him.”

The first iteration was to strap a bath seat acquired from a local hospital onto a SUP. “This was the first time we’d managed to paddle Kai into waves for real,” said Ben. “He was so stoked, but our design wasn’t perfect. I knew we had to take it to the next level.”

Ben began researching and found this video featuring a company in the States called Best Day Foundation. They had created a similar board in conjunction with Arrow Surfboards (Jay Moriarty’s former shaper). When Ben told them what they were doing they immediately sent over all the blueprints for their design. The designs were sent to another Welsh charity, the Cerebra Innovation Centre. Based in a workshop at one of the local universities, the Cerebra’s focus is on designing products to assist disabled children. They used the blueprints as the basis for a bucket seat design, which would allow Kai to feel safe and stable on the board. 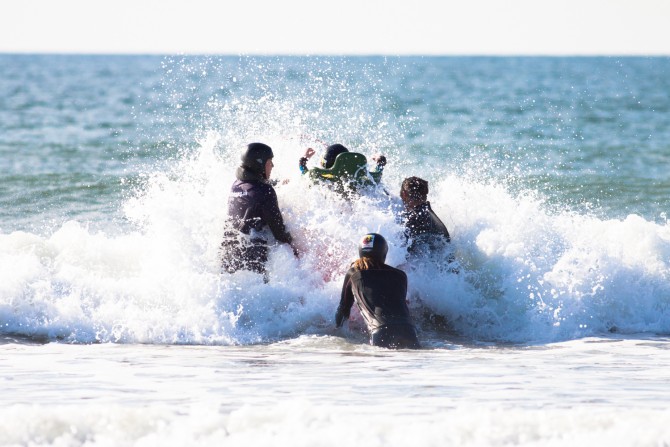 All that was needed now was a board to fix it onto. Arrow had offered to shape the board, but shipping fees from the States for a 12-foot+ board made it not an option. Fortunately, a local Welsh surfboard shaper, Roger Cooper, stepped up to the plate. A veteran shaper with over 30 years of experience, Roger Cooper has helped spread his fair share of stoke in the area.

“It was so exciting seeing the whole project come together,” said Ben. “When I called into see Roger glassing the blank it was just this amazing feeling, knowing we were going to get Kai out on the water and riding waves for real.”

Before this could happen, though, the board had to be thoroughly safety tested, and the coaches had to get used to the feel of riding the unusually long, heavy equipment. As the photos show, this was a process that was taken very seriously by the whole team. 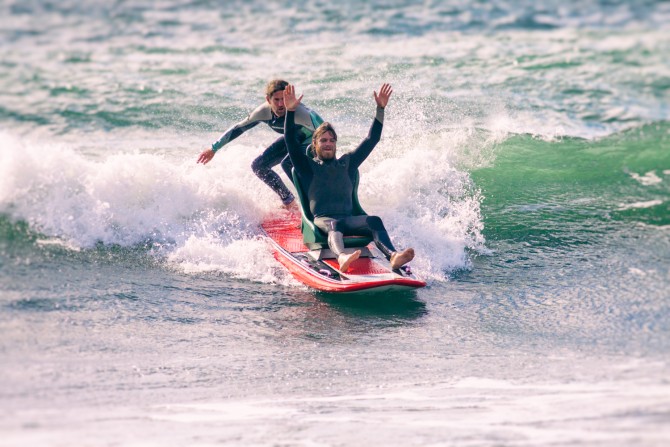 Safety first. The team gives the prototype a test before Kai has a go.

With safety checks completed, it was time for the big day. The team couldn’t have asked for better conditions. After a summer of blustery, onshore swell, Llangennith Beach was blessed with glassy, two-foot waves. With his family and friends watching from shore, Kai was strapped in and taken out back for the first time ever.

“Paddling into that first wave with Kai was incredible,” said Ben. “It was much bigger than anything he’d caught before. The board went amazingly well and we managed to ride the wave all the way in.”

As the photos illustrate, Kai’s expression was the definition of pure stoke. But there was no way they were leaving the beach with just one. A true surfer at heart, Kai just wanted to get more and more waves.

“It was amazing,” Kai’s mother Leeann explained. “It opens up so many options. Not just for Kai, but for other children with disabilities. Hopefully it’s going to get more children out of their wheelchairs. And for a parent of a child in a wheelchair, the more you can get them out, the better.”

Ben echoed these sentiments by saying, “We’ve already been contacted by several other families of disabled children wondering if the board would work for them. Hopefully it’s going to help us make surfing accessible to even more people.”

Surfability (CIC) is based in Mumbles in Swansea, South Wales. To find out more about the opportunities they offer contact them via their website.