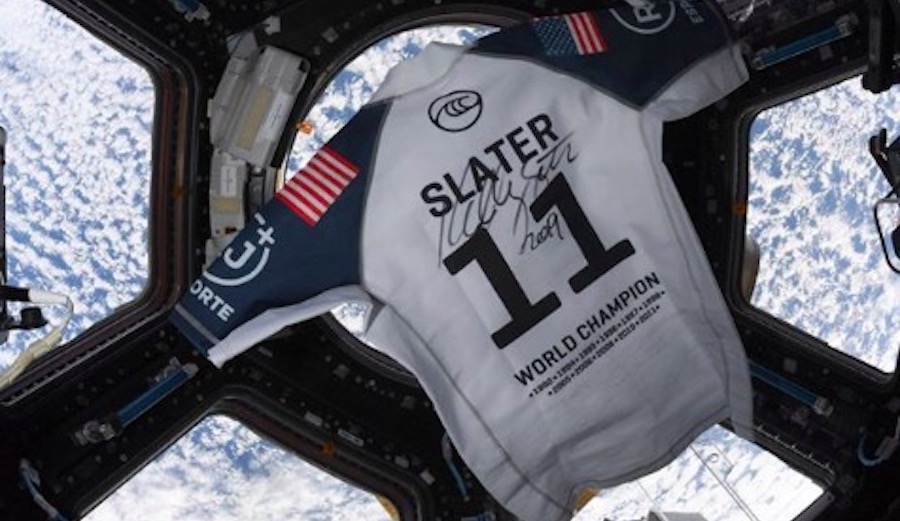 Slater’s signed Oi Rio Pro jersey is likely the first singlet to be displayed proudly in the bowels of the International Space Station. Photo: Facebook

Last May, we reported that a particularly surf-stoked American astronaut had a bit of a side hustle in addition to her highly consequential scientific work at the International Space Station. Over the course of what will be an 11-month residency on the ISS, astronaut and scientist, Christina H. Koch, has made clear by her Twitter feed that she’s a major fan of professional surfing and will routinely post photos of famous lineups around the world from her vantage in space.

Now, we don’t have much context on the how here, but apparently, in an effort to stoke out the surfy astronaut, Kelly Slater gifted Koch a signed jersey of his from the Oi Rio Pro this year. The jersey is currently in orbit, and we’d venture to guess it’s the first signed singlet to be hung proudly within the bowels of the International Space Station.

In a post on Facebook, Slater shared a few pictures explaining that on Friday he’ll be live-streaming a chat with Koch (details to come). And as he’s wont to do, he also used the opportunity to troll Flat-Earthers.

“So my World Surf League Oi Rio Pro jersey made its way into lower earth orbit on the #ISS to my friend NASA Astronaut Christina Hammock Koch who is spending 11 months up there!,” Slater explained. “(Her side hustle is taking pictures of coastlines/potential surf spots around the globe for me!)

“We recently did a live chat so I could get the lowdown on the Space Station. This coming Friday we will be doing a live public chat. When I have the details I’ll pass them along.

“In the meantime, give me some ideas below of questions you would ask an astronaut spending their years in space … what they eat, how they stay entertained, how much time they just gaze at the Earth, etc. I wonder if we’ll get any Flat Earthers?”

More on the live chat soon.