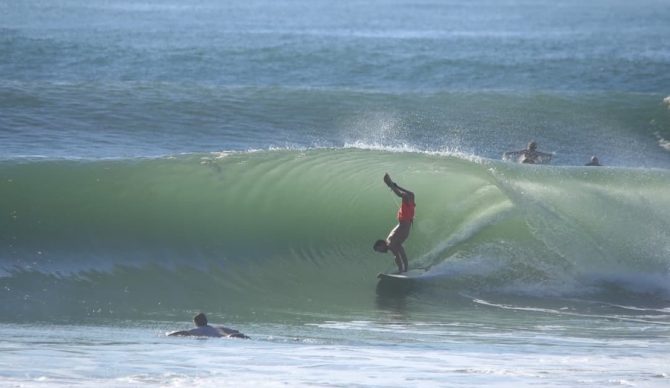 Surfing inspires all of us to push our limits and reach new heights. But while some of us are working on improving our backside attack or our tuberiding, others take a less conventional approach to the subject. Enter Taylor Watling, the “Handstand Surfer.”

Taylor is originally from Canada, where his entry into the boardsports world came in the form of snowboarding. Taylor was a sponsored rider for brands like Salomon, Sandbox, and Icarus through most of his teens, when he was on a TV show called Shreducation that ran from 2009-2010. “I even started training for the Olympic halfpipe,” Taylor told me. “But I felt like I was risking my life to do these tricks because I was being told to do them and not because I actually wanted to do them.”

So Taylor walked away from it all, and hit the road as a backpacker. Out there in the world he encountered yoga and got really into handstands. “For four years I would do handstands every day, and then started doing them on skateboards at home in Toronto,” said Taylor. “The first time I ever did a handstand on a surfboard was three or four years ago at Punta Zicatela near Puerto Escondido,” he said “And I wasn’t filming or anything but someone on the beach happened to catch a picture of the first handstand that I ever attempted there!”

Taylor now lives in Puerto Escondido where he runs Pipeline Hostel, a surf-style beachfront accommodation for surfers and travelers, and is working on improving his barrel-riding while in a handstand. His approach is impressive, if a little unconventional. Read on for the rest of the interview. 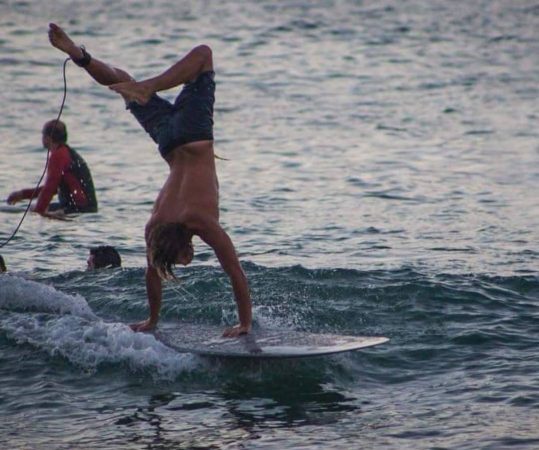 So what are the best conditions for handstand surfing?

It’s definitely easier on a longboard with a really mellow wave where you’re cruising on a stable board. But once I started I was trying it on anything. I don’t really own my own board so I’ve been borrowing and renting and always switching it up.

I’m a trick guy. I love trying to learn any trick I can. Handstands started out as something to do on a small day to keep it fun. I also love riding switch and getting barreled riding switch, or surfing with a blindfold on, so I guess you could say I’m just all about keeping things interesting (laughs). Pushing myself and challenging myself out there in the ocean. That’s what I like to do.

Have you ever been barreled while handstand surfing?
I think so but it wasn’t caught on video, and when I’m in the handstand it’s really hard to tell if I’m actually in the barrel or not. My friends say I did it but I’m not sure. I do have a couple videos of myself getting really close, but I’m working on getting deeper.

Where is your favorite wave to handstand surf at?

Barra de la Cruz, without a doubt. It peels so slowly but it’s steep and a lot of the time it’s really clean as well. Glassy conditions are definitely the best for handstands because the board cuts so smoothly through the water and there aren’t as many bumps to deal with. Today where I was surfing was sort of choppy and I was handstand surfing on a longboard and kept on getting bounced off the board.

Where do you want to take handstand surfing next?

I want to do a handstand at Pipeline Zicatela (Puerto Escondido) on an eight-foot board in a double-overhead tube. I also want to someday try handstand surfing at the Surf Ranch.