These Dudes Might Be the Coolest College Professors Out There 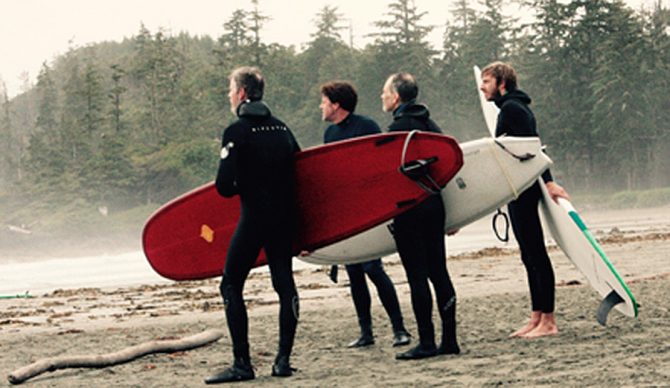 What could be further away from the Spicoli stereotype than a group of philosophy professors who surf? This June saw the second annual meeting of the PHILOsurfer Convergence, or philosophers who surf, in Tofino, Canada. A dozen hardcore philosopher/surfers from far-flung places like Texas, Virginia, Missouri, Massachusetts, New Jersey, and California descended on the small surf-town to present academic papers, socialize, and of course, surf. At first, events conspired against them: a truck carrying jet fuel crashed on the only road into town, completely shutting off access to the west coast of Vancouver Island. Being the philosophers and intellects they are, they applied some brainpower to make it work. Some spent the night on a tugboat, others hired float-planes across the island.

Once assembled — after catching up on academic papers such as Jeff King’s “Russellianism and Singular Propositions” — the elbow patches came off. Surf sessions followed. Beer flowed. At least one toe was broken (Beer, not surf, related). It turns out even philosophy professors don’t always make the smartest of choices. The conference ended with a public lecture by Aaron James from UC Irvine on “The Surfer, the Asshole, and the Future of Capitalism.” Event organizers Colin Ruloff and Patrick Findler (Kwantlen Polytechnic University and founders of Doppelgänger Surfboards) have their eyes on the warmer waters of Mexico for next year.

Note: You can learn more about PHILOsurfer on instagram here.