What It’s Like Learning to Surf in Your 30’s 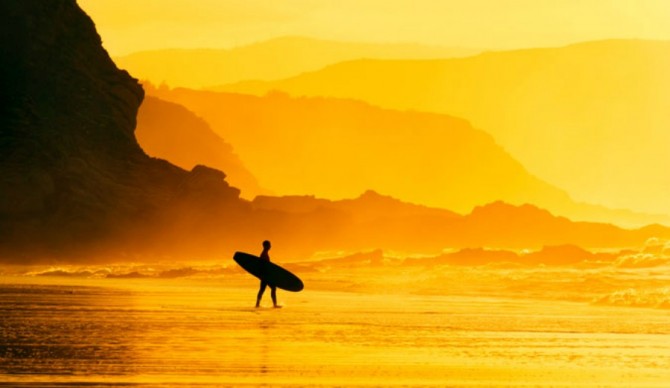 I learned to surf in my 30s, well past the point where I could expect to be the next world champ. In addition to this, the sport’s learning curve taught me I also had to learn to be OK with being just OK.

On a July Saturday in Rockaway Beach, a surf instructor pushed me into my first wave. He had already shown me how to paddle, arch my back and pop up, but I wasn’t thinking about any of that. I’d stopped thinking about anything. I did what my body wanted to do and then I was up and moving, swept forward by the great hand of the sea. My body already knew how to soften into it and ride. I was amazed at the ocean and my own inborn connection to it.

As I paddled back, the instructor saw the huge grin on my face.”You’re thinking right now, why haven’t I been doing this my whole life?” he said.

He was right. That’s exactly what I was thinking. Here I was learning to surf at 30 in New York, despite having gone to college in Santa Cruz, California. My first taste had been blissful. I looked at the instructor, many years younger than myself, and wondered about his dream life playing in the ocean all day.

I wanted to make up for lost time and my mind spun forward: When is the next wave coming? How long until I can get up every time? When will I be able to ride in the barrel? Are these other guys going to take all of the good waves?

You can imagine how that went. On the next wave I got up shaky and unsure, I pitched stiffly to the side, the board dove, and I hit the wave face-to-face.

This was the pattern for the next few years. Arriving at the beach, I would paddle out joyfully and carefree and I would get up easily. The dazzling high of that first ride preceded a craving for more. Cut off from that easy open connection to my body, I would miss more waves, get down on myself and grow even more obsessive.

Some of the ancient wisdom traditions describe how one can quickly descend from the subtle attachment to a good feeling, to planning, scheming, and greed, all the way down to the evils of war. The early buddhist texts call it the dark chain of causation. In surfing, the pull of this dark chain is no less dangerous than sweep of the undertow. If I had a few good waves in a row, I might try to get up on ones that were too big for me or I would get greedy and try to take all the best waves, ignoring the other surfers. These are dangerous things to do because if the wipeouts didn’t do me in, the guys I cut off might.

Slowly, I started to listen to what the ocean was trying to teach me. I learned to take breaks in the lineup and let great waves go by so I could reconnect with my body and the ocean. I would pause to watch the birds swoop down low and fast over the water, to see how the sunrise reflected off the ripples, to kick my feet around below me like a little kid and to taste the salty water in my mouth.

Newly enlightened, I declared that my goal in surfing was not to be great, just to enjoy myself. I even had a mantra to remind me. Bobbing beyond the breakers I would say to myself, “I’m doing it. This is surfing.”

It wasn’t always that simple though. Like all mantras and practices, there were times when I would forget. Forgetting to be grateful and in-the-moment felt even more devastating than being a new surfer. Now, in addition to the ocean’s firm correctives, I felt the pain of my own self-judgement.

Despite the frustrations, I kept showing up. This is really important. As painful as it was to be low on surfing’s totem pole and a spiritual novice, something kept calling me back to practice. Slowly, from the depths, a strange truth emerged: spiritual failure is no greater or less than any other type of failure. It’s just life and learning. The line between the great days and the terrible days dissolved and a steady acceptance of the ups and downs of the ocean became the true gift of my efforts.

It turns out the universe is always teaching in a thousand tongues and it is never too late to start listening. The ocean tells me to slow down. It tells me to feel by body and trust my connection to the water. It tells me to pause and rest on the outside. It tells me to enjoy the company of the other surfers. When I forget to listen, that’s alright too. The ocean pulls me under and shakes the nonsense out. Hopefully, I’ll be delivered to the surface in time for the next set.

I’m learning to be grateful for every day that I have the strength to paddle out again.