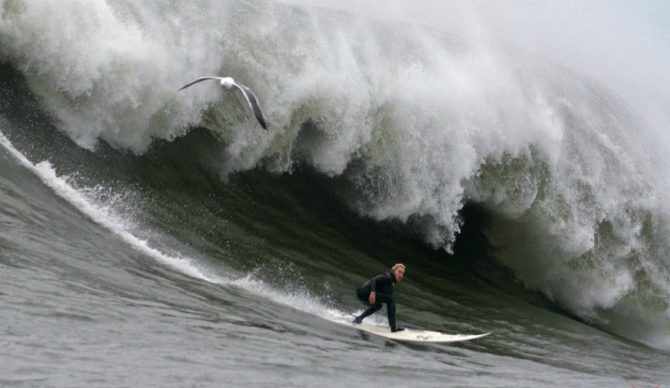 Keala Kennelly on a Mavericks bomb. Photo: @shannonreporting and @supersessions2

One heat. That’s what the women of big wave surfing have sought for a decade from the organizers of the Titans of Mavericks event.

But here we are in 2016, at a time when women have won XXL awards, gotten pitted at Jaws, shown they’re willing to risk their lives for giant waves, and the World Surf League plans to hold women’s events on its Big Wave World Tour. We’re one month from (probably, hopefully) electing our first female commander in chief. And yet, no heat at Mavs.

That’s why a collection of the world’s top big wave hell-women recently made an official plea to the California Coastal Commission to get one. If, in an upcoming hearing, the commission sides with them, women will be granted their own division — not just in the Titans of Mavericks event that holds a permit for this winter, but in every surf competition held at Mavericks ever again. That hearing is scheduled for November 2-4 in Half Moon Bay.

Technically speaking, Titans, an invitation-only event, has always been open to women. But organizers haven’t seen fit to give a woman one of the 24 jerseys handed out for competition day. And the would-be female competitors don’t want one anyhow.

“There’s no other sport in the world where the men compete against the women. The Williams sisters are never going to play against Federer,” says Keala Kennelly, the most decorated female big wave surfer of all time.

What they want is this: A one-heat women’s division held between the second semi-final and the final of the men’s competition, when the comp is on hold as male competitors take a break.

“They try to tell us over and over there’s not enough time, there’s only so many daylight hours and the permit only allows for X. But there’s no reason they can’t send the chicks out during that break,” Kennelly says.

After a decade of asking and getting nowhere, Kennelly joined forces with Paige Alms, Bianca Valenti, and Andrea Moller to form the Committee for Equity in Women’s Surfing, the group behind the request made to the commission.

“I feel like every year they pat us on the head and say, ‘No, you guys aren’t good enough.’ Women don’t belong out there, has basically been the attitude,” Kennelly says of the Committee 5, the five-man group of event shot-callers that includes Mavericks pioneer Jeff Clark. We reached out several times, but the Committee declined to comment on this story.

As Valenti puts it, the request is not about the Titans of Mavericks per se, because if another sponsor took over, the mandate for a women’s division would stand. “It’s more about creating opportunities and equality for women athletes. It speaks to much broader issues. That’s why it’s cool to be part of making this proposal,” she says.

The women’s best have been mystified by Committee 5’s chilly reception, especially given the inclusiveness from the big wave community in Hawaii and elsewhere around the world.

Making matters worse, Kennelly and Valenti were left out of this year’s draw completely, an act they feel was retribution for their outspokenness. “Bianca and myself were the most vocal in the media about including women in the Mavs event, and they didn’t invite us,” Kennelly says. “It’s weird and political.”