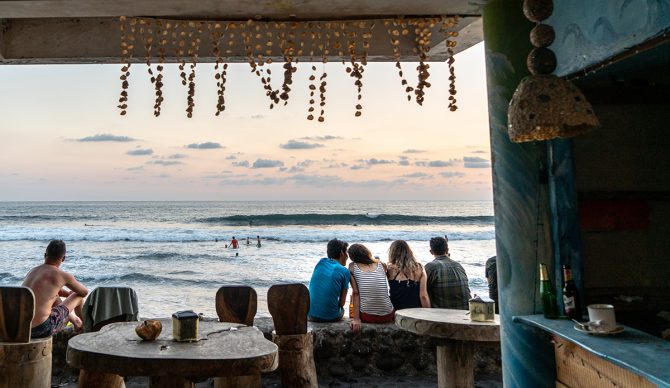 There is one final bastion of backpacker-surfer heaven and it’s the coast of El Salvador. In its tourism infancy, “The Savior’s” La Libertad region misses the chaotic, unfettered partying of more popular surf destinations like Mexico’s Sayulita. The Germans are here, which means the Americans are coming too, so if you’re looking for surf, tranquility, community, flamingo sunrises, and mandarin sunsets, you might want to get here before El Ministerio Tourismo El Salvador lands on the back of your in-flight magazine.

Unfortunately, El Salvador’s reputation precedes itself, which is why so few Americans visit. Gang violence, corruption, a devastating civil war that ran from 1980-1992, and the crack epidemic of the 1980s drove well-intentioned tourism efforts into the ground. Many of the wealthy El Salvadorian families who first saw the global attraction to this hamlet abandoned their beach houses during the civil war, leaving them to squatters, dogs, and blue-tailed lizards. Their kids—the ones with U.S. educations, foreign spouses, and an ache for home—are leading El Salvador’s tourism renaissance.

Take Arni, for example, who for five years has been slowly expanding his eco-lodge, Mandala, which is between La Libertad and San Blas. Born in El Salvador, Arni and his parents fled to Florida during the civil war. They returned four years later, however, as is the case with many of the country’s intellectuals, Arni returned to the states for college. He says the country’s biggest export is its intellectuals. He doesn’t give himself enough credit. When Arni isn’t managing Mandala Eco Villas, he takes tourists like me around the coast, which starts at the westernmost point of La Libertad, the area’s largest city, and ends twenty-three miles east at El Zonte.

Arni knows Rivas, who knows Alex. Each of them are civil war kids, each is an entrepreneur and each has more than one hand in the coast’s tourism pot. From a coffee family, Rivas owns a hostel and roasts his own mouth-bending coffee, which is sold from a small shop outside of Alex’s El Zonte hostel, Estancia Nativa. Alex was uncomfortably close to the crack epidemic, but now he owns one of El Zonte’s coolest hostels and teaches surf lessons. His wife owns a hostel down the road, Wipeout, which is accessible during low tide from the black sand beach via a charming but precarious stone stairway. A free-standing deck overlooks the ocean where — get this — with a little patience and a turn of the head, you can watch both the sunrise and the sunset. While sunrise is a more private time of day, sunset is a town spectacle. Everyone in El Zonte — the surfers, locals, weekend travelers, shop owners — joins the mass exodus to the beach around 5 pm And, if there happens to be an opening of anything, or a town hosted movie night, that’s where everyone goes after. 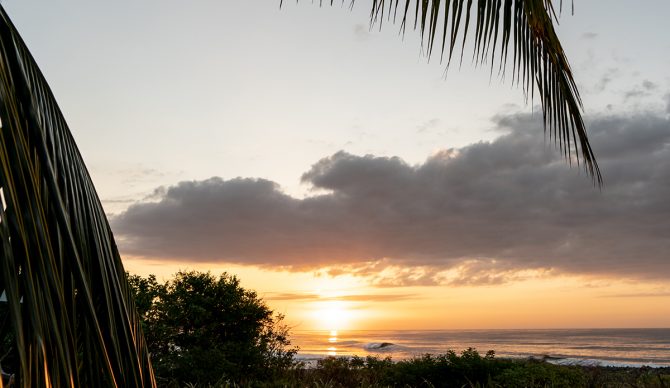 Even though I remain an appalling surfer, I have traveled to many of Central and South America’s surf hot spots and to my mind, nothing compares to the La Libertad region of El Salvador. The Arnis, Rivases, and Alexes of this area have created a quiet paradise that also happens to have, depending on the time of year, a wave for every surfer. For about $.80 — give or take a dime — surfers can catch a bus and stop at varying beach breaks and point breaks between El Zonte and the roughly 35,000-person city of La Libertad. There’s really no bad place to surf nor are there bad vibes, just different ones. El Salvador’s coastline isn’t necessarily the most efficient in the world—it’s black craggy rocks are the aftereffect of erupting volcanos—but its side effects are awesome. Namely, the coast of La Libertad is motor-less. For twenty-plus miles, there is no noise from fishing boats, no noise from paragliders, no noise from any potentially disruptive water sports. In fact, to meet the water, boats must be lowered by a crank from the La Libertad pier into the sea.

Moving West from La Libertad either via bus or a random personal taxi is a slow trip along the windy Pan American Highway. Traffic often backs up due to semi loads of sugar cane or coffee so traversing the six miles to El Tunco can take a while. With the exception of La Libertad, which sprawls up the mountainside of the Pan American Highway, the entrance to each small village along the coast feels like a cobblestone driveway protected from the road by crumbling walls that spill into the water. To be fair, the cobbles look like the lost a fight with a jackhammer. These often vertebrae-rearranging roads filter to shops, houses, and beaches. El Tunco’s dead-ends at a huge black and white sign listing the city’s rules. Among them: Keep the noise down. At certain times of year, this is necessary. El Tunco is the coast’s party town. It doesn’t have the look or feel of El Zonte, which is where Arni, Alex, and Rivas live, but there’s a reason for that. Its tourism isn’t grassroots. Essentially owned by three families, El Tunco is the only town along the coastline that feels like it’s checking a box. It does, however, have some great surfing, a badass rock that’s the El Tunco namesake—it allegedly looks like the silhouette of a pig—and some amazing pupusas. Pupusas are one of El Salvador’s remaining ethnic foods—the other being boiled iguana—and are a mix of a small quesadilla, ravioli, and arepa. They’re filled with some combo of garlic, cheese, local spinach, various meats, and beans.

El Sunzal follows El Tunco. El Sunzal has a great point break but unless you’re staying in an El Sunzal hotel, bring money for beach access. The waiters carry the fee that is undoubtedly demanded by their bosses and not sanctioned, as far as I know, by the government.

The eastern part of the region concludes with El Zonte. The most relaxing and least touristy of the La Libertad’s beachside cities, this is where Alex, Rivas, and Arni converge. All three live in El Zonte although they spend at least part of the week in San Salvador so their kids can go to school. The Alexes, Rivases, and Arnis of El Sl are the ones who sit in town hall meetings, working to keep the streets clean and friendly for tourism. They’re the ones who create economic opportunities in the community by sending tourists to each other, even if they are competing for business. If Rivas thinks his companions will be happier at Estancia Nativa than at his own hostel, he sends them to Estancia. These civil war babies are El Salvador’s unofficial ambassadors. They’re the ones who personally shuttle tourists around the coast. Of course, this personal touch and this arms-open approach for tourism won’t last forever. At some point, tourism will ruin what these three so desperately want to preserve. But as Arni says, “We all eat the same corn.” Today, if your neighbor loses, you lose. If you’re neighbor wins, so do you. If something’s saved, everyone benefits.