Circumnavigating: Paris and London Plus Board 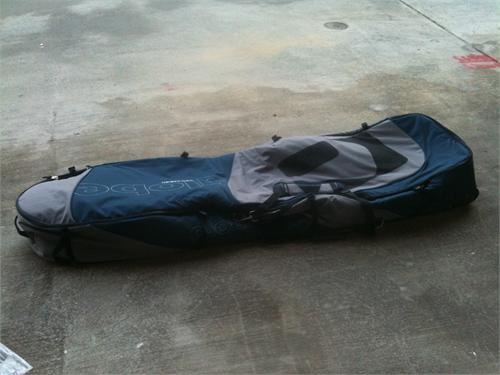 Against all logic and airline stipulations, my board and I traveled from New York to Paris, to Metz, back to Paris, to London, and to Sydney (via Bangkok) without paying a single baggage fee. Unless you count needing a bigger-than-standard taxi in Paris. And actually, the board got me some free first-class Chunnel seats.

Friends at home kept suggesting that I just ship the Penguin straight to Australia and forget about dragging it around with me, for the sake of expediency and cash flow. I insisted that taking it with me would be a “funny” thing to do—and would probably be cheaper. To those friends, I say… “Wait a second, I was right?” Okay, only half right, maybe.

The guy who checks me in at the Iceland Air counter gingerly presses a “Fragile” sticker onto the bag and says it is light enough to fly for free. The very image of hospitality. Nevermind that I will shiver through the entire flight, there will be no food served, and Icelandic sounds like a mash-up language.

I am eager to see Reykjavik and realize only as we arrive in the pitch-black morning hours that Iceland is largely sunless this time of year. As we disembark, the pilot (or somebody) says, “Have a pleasant afternoon!” Not only is it dark; it is also still pre-standard breakfast hours. Seriously bizarre. When we board the next plane at 8 a.m. I have seen a lot of whipping rain on the runway and drunk Koko Mjolk. I assume this is pronounced “Co-co m’yolk” and as of now, it is my favorite foreign food name.

Though flying east, we somehow end up in 7:37 a.m. again. The sun finally peaks over the cloud carpet below us as we swing to the south of the Faeroe Islands, and just like that, it’s 8:54 again.

I really should have brushed up on my French before taking this trip.

“Carton?” asks the guy at baggage inquiries as he points to a big flat screen (in a box).

“Ahh…” He indicates for me to wait at another counter but no one comes to assist me. After a few minutes, the board emerges on top of a trolley and he happily reunites us.

I think people must be gawking when I’m not looking, but nobody says a word about the surfboard in Charles de Gaulle.

Ali and I manage to secure a van taxi, and board transport goes smoothly until we reach our hotel. The elevator, barely big enough for three medium-sized humans sans luggage, requires that we take two trips: One for Ali and our suitcases; one for my board and me. For the next three days, the Penguin reposes in the corner of our compact room while I pretend to know my way around Paris.

I realize I haven’t been here in 5 years. 5 years! That’s depressing. Last time I was here, I didn’t want to leave, and I certainly didn’t want to wait 5 years to come back. When I convinced my New York roomie/classmate/friend that we should take a trans-Atlantic journey, I also managed to persuade her that it would be ludicrous to visit London without visiting Paris, and it wound up being cheaper to fly from JFK to Paris, so here we are.

Paris is a whirlwind of landmarks, masterpieces, and heavy cream. On the morning of our departure, the hotel concierge appeals to the presumably sleepy cab dispatcher on the other end of the phone for a larger car. I hear the words “planche de surf” and “oui” repeated a lot. He seems exasperated and apologetic that they have to charge me an extra €5 for a bigger car. I’m making out like a bandit. Seriously.

Andromeda requested that I leave my board in Paris somewhere, since her new car is even smaller than the old one. And pretty much all cars in France are, actually, very small. Andromeda (yes, that is her real name) is my friend from college who now lives in Metz. I am visiting her for the first time since she moved to France–about three years ago. My main motivation is that she now has a cat named Vortex. Her boyfriend Ben tells me the cat is named after the drunken sensation that he calls being “in the vortex.”

Gare de l’Est will not, as it turns out, store my board. The woman near the luggage lockers looks at me like I’m insane when I ask if it would be possible just to leave it locked in their little office. I take this as a “No.”

One of the guys with whom I’m sharing a space heater at 7 a.m. asks me if the long, silver bag I’m toting is a surfboard. When I say yes, he asks where I’m going. “Metz,” I say. He laughs and says there’s no surf in Metz. Yeah, I know.

Dromeda is a good sport about the 6-foot piece of luggage and we manage to squeeze it into her little hatchback, though she did have to ask me if any cars were coming on my side every time we merged/made turns. She opted not to mention this to Ben.

Metz is a really cool city that once belonged to Germany, and maybe some other country. It’s full of yellow stone buildings and award-winning boulangeries. There’s also a lake, in which a dragon allegedly lives. That might be my favorite thing about Metz. That, or, the really excellent Belgian and German beer that is brewed nearby and doesn’t cost a fortune.

One night while we are enjoying this beer (Maredsous Brune!), we touch on the subject of my upcoming journey to Australia. Ben’s friend Jerome (who claims his English is terrible, but is lying) says, “I hope you like crocodiles.”