ANDRÉ CARVALHO was born in Lisbon in 1976. Ever since, photography has been present in his life, which in one way or another, influenced the way he looks at things. In 1995 he enrolled in a degree in communication design at IADE, concluded in 1999. During the following three years, he became exclusively dedicated to graphic design while working in some advertising agencies. In 2002 he began shooting snowboarding for Snowboard Motion and other SNW* magazines. André’s connection to the beach and surfing since he was 12 years old pushed him, to start shooting surfing in 2004. His first photography was published in 2005 at ONFIRE magazine. From then on he maintained a constant collaboration with several specialty magazines and websites. Never lost his passion for design and along with a friend, in 2004 André founded GOMA, a multidisciplinary graphic design studio. From 2011 up to 2013 he took office as an art director and resident photographer for the SurfPortugal magazine. Being a people’s person, his taste for travel and different ways of life came together, resulting in a widely diversified portfolio, covering areas such as action sports, events, advertising, people and so on. André has photographs published in various media such as: ONFIRE, SurfPortugal, Soup, Vert, FreeSurfer, Surfeurope, 3Sessenta, Surfer news, Express, View, Record, Parq, Courier. Since 2008 he has a partnership with the clothing brand VOLCOM. In 2014 André Carvalho was chosen by Turismo de Portugal to be Garrett McNamara Photographer in a 30 days surftrip around Portugal for a series of international publications promoting Portuguese tourism. In 2015, André Carvalho, won the biggest award in Portuguese Surf Awards (Onda de Ouro) at the Photography of the year category. 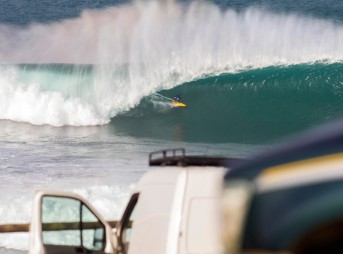