Kristen once heard that 8% of people actually keep their New Year's resolutions. Lucky her, she made a resolution in January of 2011 that she actually would keep. Six months later it was love at first wipeout. Since then surfing has ruined her life; in October of 2012, she took a leap of faith, left her job at a big bank in NYC and moved to Costa Rica to work for surf legend, Robert August. When she is not surfing or "twitter-floppy-blogging" for Robert August, she is finding something to photograph. It just so happens that Costa Rica is a photographer's dream, which enticed her to start designing and selling a line of 100% recycled postcards and notecards, called Samba to the Sea Designs, using her Costa Rican photographs. Check out her sunsets via The Sunset Shop, and her photography work, Samba to the Sea . And her family thought she would turn into a surf bum. Pura vida, mae. 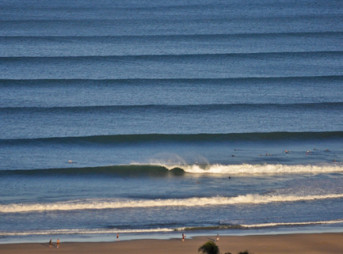