At USC, Skater-Slash-Professor Neftalie Williams Examines Skateboarding As a Tool for Cultural Diplomacy 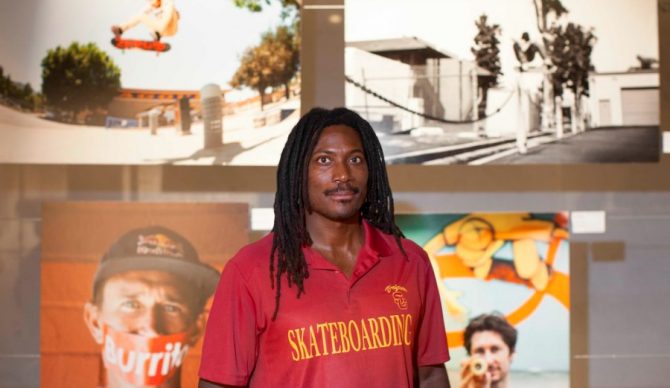 Any skateboarder knows the University of Southern California is a solid place to skate — the Los Angeles school’s waxed-up ledges are actually somewhat iconic street. Fewer might realize that it’s the only place to get an education in skateboarding as a tool for diplomacy, where students use it as a lens through which to understand issues of race, class, gender, and youth empowerment.

Next fall will make three years for USC’s course “Skateboarding and Action Sports in Business, Media, and Culture.” taught by Neftalie Williams. Williams, a skate industry veteran and academic researcher, is the first in the country to lecture about skateboarding. Classroom guests have included legendary skaters Rodney Mullen, Vanessa Torres, Joey Brezinski, as well as Sal Masekela, and Vans founder Steve Van Doren.

Want to know what’s on the midterm? Students might have to answer questions like: How can we increase the number of women in skate and action sports? Or, how do we use skateboarding as a tool for cultural diplomacy?

“We want to encourage minorities and create youth engagement. So how can we see whose needs aren’t being met? How can we create global citizens, solve social ills and at the same time examine race, class, and gender?” he says.

Williams believes skateboarding can do all of that, and maybe help students who don’t have industry connections get a job. As chairman of Cuba Skate, a nonprofit organization, Williams has put some of his academic ideas into practice by giving Cuban skaters access to equipment and skateparks and growing the skateboarding community on the island. He’s also organized skating clinics with Syrian refugees and local kids in the Netherlands; keeping with the theme, he’s the first academic and skateboarding envoy to the Netherlands for the Unites States. The State Department has asked him to expand that program to arrange diplomatic skateboarding missions all over the world.

“In skate, you have a shared community made up of individuals all over the globe. That becomes a way to join them all,” he says.

Originally from Massachusetts, Williams came up in the East Coast skate scene. Before starting his academic career, he consulted for skateparks, worked for the Maloof Skateboarding Organization, Skate Park of Tampa, as team manager for Citystars Skateboarding, and frequently contributed to Transworld Skateboarding, among many other resume items. “I’ve been in the industry a long time. I’m not somebody from outside the culture talking about it,” he says.

Since recently earning a master’s degree, he’s embarked on a PhD in sport and culture from the University of Waikato in New Zealand, currently on sabbatical from USC.

Skateboarding is a perfect candidate for sports diplomacy, because of its low barrier to entry; you only need a skateboard to get going. Skateboarding already has a global network of self-identified skaters in nearly every corner of the planet. To hear it from Williams, skaters are natural community-builders eager to make skater friends and accept others into the culture.

Here’s how he explained it in an interview with The Atlantic about his work with Cuba Skate:

“All these kids decide they believe in these norms and this activity. Sure, you’re playing basketball. Sure, you’re playing soccer, but there’s nothing in the DNA that says you’re supposed to go out and build community. That’s why skateboarding is different. It says go build community, go reimagine the world around you and make sure you’re having fun while you do it.”