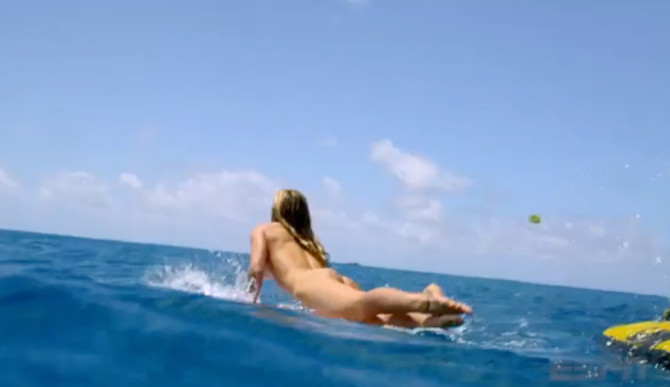 When the list of athletes for ESPN the Magazine‘s annual “The Body Issue” was unveiled, we were excited to see one of our favorite athletes on the list. Sure, there are the obvious reasons, such as the fact that Coco Ho has the typical surfer’s body (which is to say what has become widely recognized as “hot” or “sexy”). But, above all, we were excited because we feel that she has the perfect personality to make the most of an opportunity like this, not taking herself too seriously and having fun with the project instead.

Anyway, we reached out and asked her about making a decision to participate, her favorite asset, and the apparent family tradition of getting naked on surfboards.

ESPN has been doing “The Body Issue” for a while, and even though there is a very obvious and in-your-face sexuality about it, they have somehow been able to preserve the integrity of the collection as, above all, a bare-all exhibit of sorts for raw athleticism, stripped of uniforms and equipment. When you saw Kelly, Maya, and Steph in the past issues, what was your reaction then? Was it positive, or was there ever any scrutiny on your end?

Hmm, thing is I don’t see the “in-your-face” sexuality about the ESPN “The Body Issue” — if anything, I see the integrity in ESPN as a whole and think of it as something so prestigious, a once-in-a-lifetime opportunity. So when I seen Kelly, Maya, and Steph’s, the only thought that registered was: “This is sick, this is the only nude shoot I’d ever do!”

How did they approach you? What was your initial reaction? Were you gung-ho from the start, or was there a discussion around your involvement?

I was approached through email via my manager, and I was ever so excited because I’ve been waiting for this day. I’ve been offered to do the “sexy” Stab mag shoots more than a handful of times — the one that almost half of the girls have already done — but I told my manager the only nude shoot I’d ever do was “The Body Issue.” If I was ever to strip down for a photo shoot I wanted it to be with integrity and alongside some of the world’s most respected athletes.

What was the shoot like? Was it, in any way, awkward? Who was in the room with you?

The shoot was as mellow as a production this big could be. We had a really great crew on a boat, zodiac, and jet skis! ESPN has been doing the issue for quite some time now and had everything dialed; I felt really comfortable. Most of my shoot was in the ocean so I had my board for protection — haha — but it wasn’t too bad. I couldn’t imagine being nude straight on in a studio… now that seems awkward! 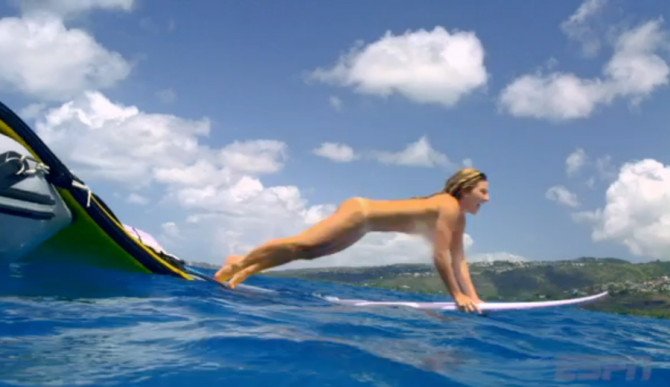 Superficial or not, what physical asset are you most proud about?

I guess with a lot of leg work, us as surfers get a good butt. I’m down with that! Nothing’s sagging… yet. Haha.

Ultimately, looking back, are you proud of it? Excited? Nervous? How do you feel as first a surfer, and then as an ambassador for the sport (which, in this issue, is what you effectively are)?

I am extremely proud! I’m proud of myself, one, for being comfortable in my skin to do it, and, two, for embracing my strength as beauty and as an athlete.

There is a lot of talk about the way women are portrayed in surf. Any thoughts on that? Do you think you’ll get any flack?

There is a lot of talk about the way women are portrayed in surf, and it’s a very fine line. If I do get flack, it’s for the wrong reasons: I am photographed alongside Michael Phelps, Venus Williams, etc., etc., showcasing my body as an athlete – not lying on a bed. Big difference.

What is Mark’s (McMorris – Coco’s boyfriend) reaction? How does he feel about everyone gawking at your body, however tasteful the spread?

Mark is the most supportive, career savvy, honest boyfriend ever! He wants whatever is best for me and would be very honest if he thinks something isn’t. I take his words to heart and trust his decisions. He was very supportive of the shoot. He was actually there with me the entire shoot, my safety net.

Is this a family tradition? Getting naked? Mason made a good go of it by surfing naked in the expression session. Have you yourself ever surfed naked? If not, what is the weirdest thing you’ve done out in the water?

You would think so after this, right?!? I was stressing at the idea of having to surf naked… but then you see my brother doing it every opportunity he can. We all had a good laugh at that. I had never surfed naked, and most likely will never do it again — surfing is comfier in a bikini, f.y.i. And Mason is just too unique for this planet! HAHA!