Mark Cuban and Ashton Kutcher Just invested $200,000 Into These Handplanes on Shark Tank 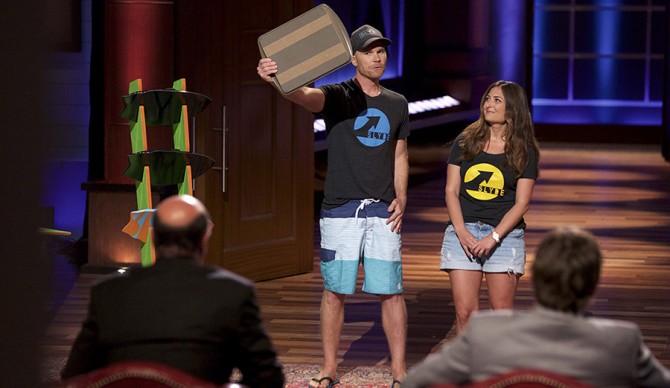 Steve Watts launched Slyde Handboards in 2010 after a lifetime of being in love with bodysurfing. He’d brought his passion from South Africa to California, where he and his wife, Angela, ran their business in an Dana Point apartment so they could remain close to the surf industry. They’d invested their life savings into the company since they started working together in 2013. Angela’s mother  had even saved $10,000 that was supposed to be used for her daughter’s wedding, deciding instead to invest most of it in the new family business. Even today the couple is paying off credit card debt built up over the years of not paying themselves a salary. But after all this, thanks to a solid sales pitch and some good old fashioned prime time television exposure, the startup is in a brand new office space in San Clemente.

For three seasons, Steve and Angela submitted applications to get their business in front of “the sharks” of ABC’s hit primetime TV show, Shark Tank. Applications numbers one and two were both rejected. The third time was a charm when show producers called with the good news that Slyde Handboards would get a spot in the show. So the stage was set and the Watts were on their way to explain how hunting for fast food restaurant trays evolved into a business worth investing in.

“It is extremely difficult to grow a business with a sport that most people have never heard of, especially when you don’t have the funds for a marketing budget,” Steve Watts said before going on the show.

The pitch worked, with Ashton Kutcher and billionaire businessman Mark Cuban splitting a $200,000 investment for 22% of the company. They were stoked enough on the new deal that they strapped on a couple boards themselves and high fived, and Kutcher called it “the minimalist approach to going out and catching a wave.” He also added “This is cool ’cause you’re cool,” obviously excited about his newest investment.

Between 2011 and the first half of 2015, total sales for Slyde Handboard were at $356,000. But with the help of their business partners Angela says “We haven’t been able to keep up with the orders, because they just keep coming in.”

Not too shabby for an idea that started with using fast food trays and flip flops to catch a couple waves.