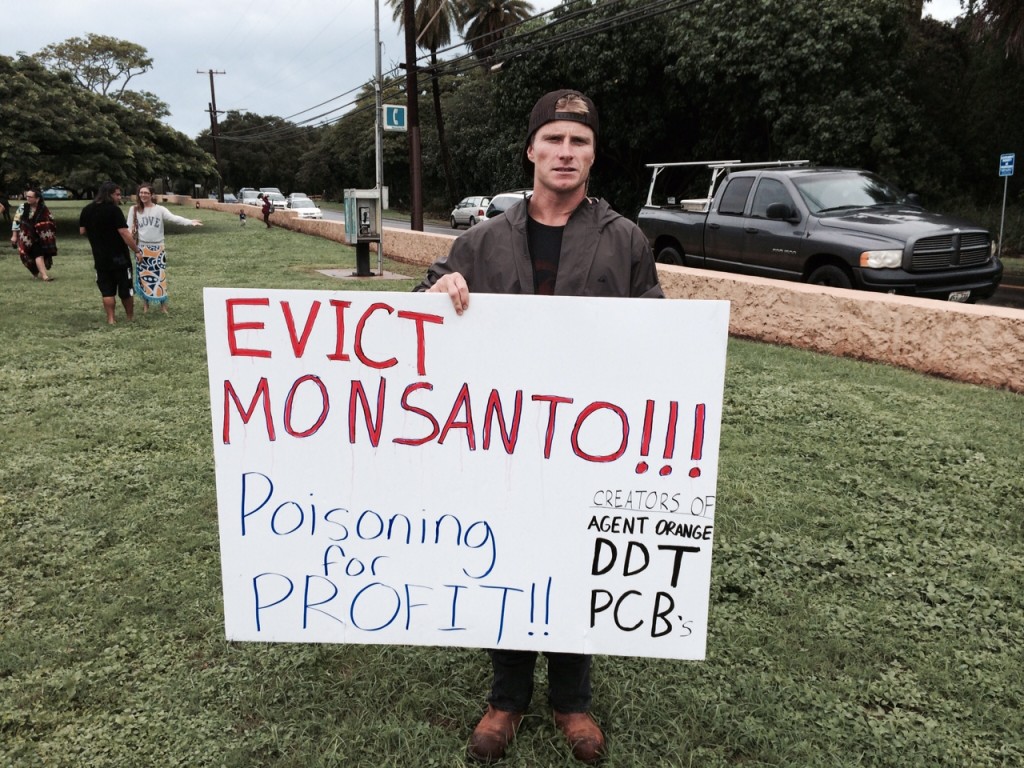 “All these poisons will have consequences down the line,” said Mark Healey. “We’ve got to make moves at the moment. ” Mark Healey joined hundreds of professional surfers to protest Monsanto and GMOs in Hawaii.

“All people have to do is look this shit up, and you will be pissed,” said Mark Healey, a man who has made a global reputation by surfing some of the largest waves on the planet. Today, Mark is standing in the pouring rain at the Haleiwa Beach Park on the North Shore of Oahu with a band of 1,000 local residents and professional surfers protesting the use of GMOs in Hawaii. This crowd wants multinational chemical and agriculture corporations like Monsanto to leave. The signs make that clear:

“It’s appalling,” says Healey. “The scary thing is that all these poisons will have consequences down the line. Look at Monsanto. They’ve  made Agent Orange, DDT, and PCB – some of the worst toxins, and it took everybody getting cancer and birth defects to finally do something. Obviously, their track record of human rights is not fucking good. In fact, it’s the worst of any company ever outside of a government regime. So, yeah, we’re supposed to trust these guys unregulated to test things? Give me a break.”

According to Healey, Hawaii has become ground zero for GMO testing for two reasons. First, the climate enables four yields of crops annually (compared to two on the mainland, which substantially increases the toxic output into Hawaiian land), while serving as an operational optimization for biotech companies. Second, the isolation of the islands reduces the risk of spreading harmful chemicals elsewhere.

In the center of the crowd, Dustin Barca grunts into a megaphone. He is standing on a pickup truck and wearing galoshes. Barca is a former ASP World Tour competitor and professional fighter from Kauai. Right now, he’s fighting GMOs. He’s the man who organized this rally and helped pass Bill 2491 in Kauai. The Bill requires more transparency from corporations as well as buffer zones between testing grounds and schools. 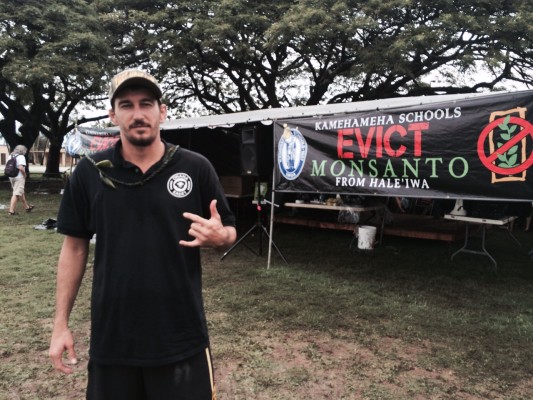 “It looked like there was a hurricane in the morning, and we got about 1,000 people to show up in the pouring rain,” said Dustin Barca. “We persevered and showed the integrity of the people.”

“Surfers are connected to Mother Nature probably more than anybody on earth,” said Barca. “She gives us everything. And me, I grew up super country. We catch our own fish. We catch our own pigs. We eat from our gardens. It’s an easy life. When someone comes in and puts a threat to all the things you love, you’ve just got to do something about it.”

And the surfers turned up. Kelly Slater, Greg Long, Rusty Long, John John Florence, Sunny Garcia, Fred Patacchia, Kala Alexander and many others paraded through downtown Haleiwa (through a flash flood warning and torrential rain) to support the cause.

“I am here because I think that Dustin Barca has some MLK in him,” said surfing and action sports commentator Sal Masekela. “To see the way he’s galvanized an entire state from just a few people is amazing. These are the kind of things that get global momentum. Everything big starts small.”

It’s not often professional surfers talk passionately into microphones and in front of cameras about social and environmental issues. But the issue of genetically modified organisms in Hawaii clearly has struck a chord.

“We feel like we have more to lose than other people, because it’s relevant,” said Healey. “Whereas if you don’t have that attachment to nature, you don’t realize you have so much to lose until it’s gone already. We try to be responsible and make a move before it’s too late.”

He pauses and laughs. “Just another dumb surfer.”