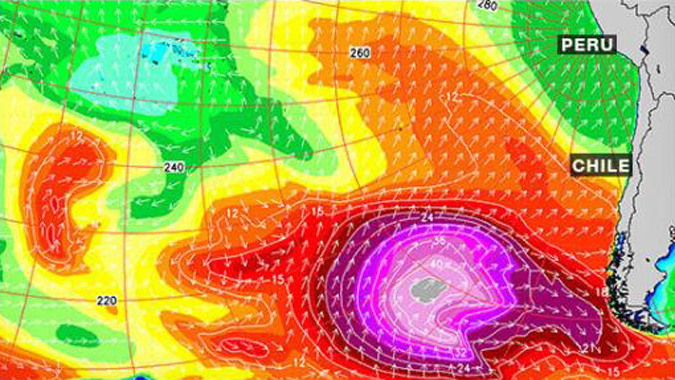 That purple blob is being called the swell of the year. Image: Surfline.com

Game on, folks. The 2014 Billabong Pico Alto, Peru, got the green light after being on Yellow Alert as Big Wave World Tour officials watched the swell build off Antarctica. ASP Big Wave Commissioner, Peter Mel, called the conditions ideal and is excited to get the 2014/2015 season started on Thursday.

2012 was the last time this event ran in Peru, and Carlos Burle took out the field. Burle is listed as an ASP BWWT wildcard for the Billabong Pico Alto event this time around.

As the biggest swell of the year, and what’s being called one of the biggest in the last couple years, makes its way toward land, all eyes will be on the big, purple blob as it’s expected to peak on Thursday, July 3. Wave heights are expected to be in the 25-40 foot range with larger waves not being ruled out.

Here’s who you can expect to see in Peru:

Watch the live webcast at aspworldtour.com