A Tomboy’s Transition: The Quest to Master Surfing 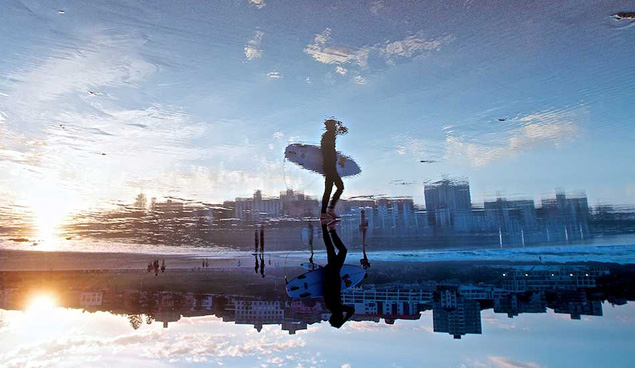 In the final episode of the first season of Puberty Blues, our formidable pair Debbie and Sue finally burst forth. We’d had inklings of their potential. The writers provided plenty of space for our 2013 selves to silently plead for their ballsy navigation of the beach and all its inherent gender politics. And someone was listening. Debbie drops Danny. Debbie and Sue swoop in and save Freda from that rapey sand-man cave. And in the ultimate up yours, our duo grab a longboard and take to the Cronulla waves.

If only it was that easy. Or if it wasn’t 30 years later and the difference didn’t look so small. I’ve always been a tomboy. Always dressed slightly to the left, played sports, unhinged my femininity at the hips. In my early twenties it was more extreme, I played Australian Rules football and dressed in a uniform that consisted of boxer shorts and shearer’s singlets daily. I’m not kidding. Looking back, I am amazed at my balls and the fact that I was never without a boyfriend.

Eighteen months ago, an old friend of mine suggested that perhaps we would be good together. “Wouldn’t it be great, Rach? We could just kick the footy and surf all day?” Quietly, I thought there might be other things that we could do but aside from a plea stemming from nostalgia, my friend equated so-called manly pursuits with the absence of wifely nagging. We didn’t go there but having not had any better offers, I did start to wonder whether my non-girly-girl attitude was impinging upon my current single status. Perhaps I had been playing kick-to-kick when they were handing out eyeliner lessons and piercing ears. Perhaps I was ignoring my gender in a bid to not turn out typical–to be the anti-wife/mother/daughter. Perhaps some things needed to change.

I edited my wardrobe, started to wear make up for the first time in my life, decided to grow my hair. At 30, in this city, I would have to get softer. You can take the boy out of the girl, but not quite ready to let go, I took up surfing.

On an early mid-week morning at Bondi, I arrived at the Let’s Go Surfing storefront, ever-confident in my innate skill and coordination. I looked around at my fellow learners–a backpacking French couple, a tiny Israeli girl, an English nanny, a tall German. I was the only Australian which apparently entitled me to the “local” label–an assumption I took to underwrite my natural ability. As we sat on the sand talking rips, one Frenchie piped up with concerns about sharks. Oh please, I thought, who are these amateurs? We all spoke of our goals for the day, a genuine tool box meeting. The nanny, on her second day of lessons, announced that she would like to stand on her board more consistently. And yes, I took that as proof that I could trump these tourists.

As one who lives in a city by the sea, we all know the necessity of entering the ocean with a heady dose of fear. With that great equalizer, she will easily strip any who dare to pierce her water with cock-sure posturing. That morning, I barely managed to stand more than a half-dozen times, and those moments were brief.

My competitive edge being greater than my desire for romance, I arrived at Bondi the following day for my second lesson. Convinced that I was no klutz, I was determined to master surfing. Again frustrated with, I hate to admit, tears welling in my eyes, I failed. I couldn’t understand why – had my love of foundation and heels removed my ability to coordinate my body? If that wasn’t enough, when we left the water I asked my instructor if he could see where I was going wrong. He paused and deflected, “But you are very confident in the water, Rachel.” When I inquired as to whether there were any lessons available tomorrow, he replied in the diplomatic transparency of teachers, “Maybe you should try and go out by yourself before you have another lesson?”

So that is exactly what I did. For the past month, I have been removing myself from my writing desk and hitting the ocean. You’ll be glad to know that I am getting there. Slowly but surely I am standing and steering, learning to be at one with the waves. The best thing about becoming a surfer in the city is my newfound awareness of the weather. Easterlies and northerlies, those once-a-week steaming days we’ve had, they all mean something more than a right pain in the arse. Although sometimes they mean that too for Bondi. And other excellent byproducts? I can assure you the fastest way to trim thighs, hips and stomach is to get on a board. With a daily surfing habit, the ever-on-holiday tan is not something to be sniffed at in September.

But, as if to punish my boyish indiscretion, two weeks ago, an unfortunate incident occurred. A boy I met post-tomboy-Rachel unwittingly revealed the reason behind the end of our short-lived romance. He had seen an old photograph of me dressed in my football uniform and – his words – “all attraction died.” As they say, you can’t please ‘em all or is it fickle pickle? One of the two. My battleground wasn’t the sports oval. It was the bedroom. The shiny locks, the pretty dresses, the red lippie all meant nothing. The photographic proof had emerged akin to unclasping a bra mid-fondle to find, “Oh. I see.” But the photograph reminded me of the girl I once was. The Debbie and Sue I used to be. The girl who had no care for what others thought–no care for no care–the confidence of nonchalance. And with that, I picked up my board and decided that no longer would I let others judge me. That included my own worst enemy: myself. From now on, the ocean would be the only one vested with that power. So, lady sea, bring it on.