Bianca started surfing around the age of seven, which seemed to happen very naturally growing up in a surfing family with a beach-cultured lifestyle. Most of her earliest memories are of her family going on countless trips up and down the coast of South Africa. Having achieved provincial colors in five other sports at school, Bianca decided to pursue surfing as a career after claiming eight South African titles, and winning every event she entered in South Africa. Although Bianca has been traveling to compete internationally since a very young age, winning career defining events such as the Rip Curl Final in 2010 and the Billabong World Junior Champs in 2011, academics was a priority and she completed matriculation with six distinctions. From 2012, she spent one year on the WQS full-time, ended second in the series, which secured her spot on the World Championship Tour in 2013. In her rookie year, Bianca ended 8th in the World Tour ratings. She is currently competing on the World Tour 2014. 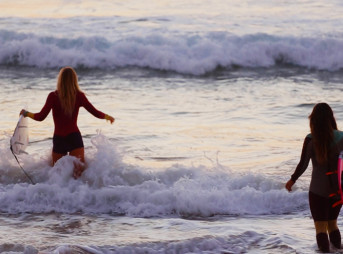