I grew up on Sydney’s Northern Beaches. In the summer of 1959 / 60 I started surfing and my father built a dark room under the house, showed me how to process and print black and white film. I graduated from a Box Brownie to borrowing my father’s 35mm Miranda SLR with no metering and a Tamron Twin Tele lens. February 1964, I bought a Komura 400 mm telephoto lens with my first few months’ pay. Six months later I had five black and white photos and 250 words published in the August 1964 issue of Surfing World. Subsequent feature articles and photos were published in Surfing World until the end of the decade. Photographically I was beginning to look beyond surfing and took a few portraits although only several stand out. I used the occasional colour negative film and dabbled with an old twin lens Mamiya and later started taking more abstract black and white images. 1971, along with Russel and Phil Sheppard started 16mm filming for: Our Day in The Sun, narrated by Midget Farrelly. That was cut into a 25 Minute short that premiered at a Surf Film Festival at Sydney. Early 1972, Russell, Phil and I commenced work on the feature length film: A Winters Tale, shot in New Zealand, South Africa, Hawaii and Australia that premiered in February 1974. October 1974, again contributed to Surfing World Magazine for several years but this time Bruce Channon who I had written about a decade earlier was the editor. Towards the end of the seventies I was using a Leicaflex, hand held with a 180mm lens to shoot black and white surfing action and was establishing myself as a commercial photographer. Bruce Channon started editing Australian Long Boarding in 2002 and I again continued my relationship with him. Contributing photography occasionally but predominately writing profiles of surfing community characters. From 2012 the new quarterly magazine, White Horses has become home to my words and photography. I have been a commercial photographer since the mid seventies and writing for two photography magazines. 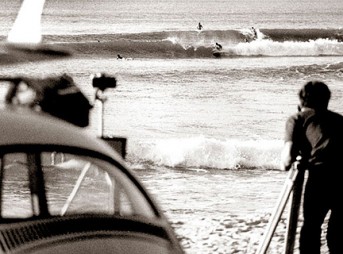