Dean Kerbox. nicknamed Buzzy, was born to insurance salesman Bill Kerbox, and his wife Dody, the youngest of three boys. After ten years stuck between the bitter winters and oppressive, humid summers of the flatlands, Bill took decisive action and uprooted his brood to Hawaii in 1967. Aboard the Lurline, the Kerbox family joined the growing stream of migrants making the epic voyage to the Islands in hope of a fresh start. At Waikiki, age 11, Buzzy began his life as a waterman. He proved himself in local contests and, in 1974, won the Smirnoff Pro Am. On Oahu's North Shore, Buzzy progressed to the semi finals at Sunset Beach, before the contest was moved to classic big wave arena, Waimea Bay. That year saw the largest waves of any event in surfing history. By now 10th in the world ranking, Buzzy had become one of the elite pioneers of the world circuit, remaining in the top 16 for many years. In 1978 he won the World Cup at Sunset beach, finishing 6th in the IPS World Title Rankings, then struck again down under winning the 1980 Surf a Bout in Sydney, Australia. Twenty-one years into this odyssey, Buzzy cemented his own place in surf history when he and Laird Hamilton began to experiment towing each other into gigantic Phantoms and Outside Backyards in an inflatable boat on the North Shore. By 1993 they had refined this new approach and decamped to Maui in search of the Unridden Realm. In opening Jaws to the surfing world, their tow-in approach to tackling massive waves has changed big wave riding forever. While he was out of the water, Buzzy found time to become one of the first icons of extreme sports. Splashed in the pages of Vogue Magazine in 1978, Ralph Lauren chose him as the face of Polo Sport for more than quarter of century. Now 50, and charging a little less harder, Buzzy is discovering life on the other side of the lens and never goes anywhere without his camera. He recently captured his friend in action as he pulled into a massive barrel at Jaws and was more excited about getting the shot than if he had ridden the wave himself. While he is not yet ready to give up big wave surfing, he wants to take advantage of his time and experience on the water to share moments that few would ever see. 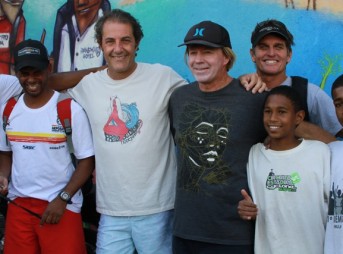 The Masters Ride in Rio: What Changed?