Chris Benchetler's earliest skiing memory seems to have clearly defined his future. He remembers tumbling down Monument (a run from the top of Mammoth Mountain) in a red one-piece and crying when he reached the bottom. His dad made him get up and ski it again. Today, the story reads a bit differently as Chris now has his own pro model ski with Atomic, “The Bent_Chetler,” and develops multiple other signature pieces for Dragon and Dakine. Chris has been quoted saying, “I try to share how I see skiing in such a way that it motivates people, young and old, to look at our sport and the terrain with a fresh perspective. I hope to inspire them to slash, do a 360, or try a butter, and break away from the norm.” Born 11/13/86 and raised in the little town of Bishop, CA, forty minutes south of Mammoth, Chris’ parents took him took him skiing from a very young age. He started out as a ski racer, but quickly fell in love with jumping and skiing the entire mountain, by virtue of his countless snowboard influences, including his older brother, Peter. Chris then started competing in slopestyle, but shortly after met the film crew Poorboyz Productions, and realized he could ski powder for a living. He quickly bailed on the contest scene and started chasing his true passion; deep snow. Now Chris is known for traveling the world and skiing in front of a camera for Nimbus Independent, which is a production company he, Eric Pollard, Pep Fujas, and Andy Mahre started in 2008. He has also been featured in films with TGR, Sweet Grass Productions, Warren Miller, and MSP. Chris was one of Skiing Magazine’s 2010 Skiers of The Year, competed in X-Games Real Ski, and has had countless editorial and video pieces over the years. When he’s not skiing he’s known for being one of the most active humans we know. He’s an avid rock climber, mountain biker, road cyclist, been known to do a triathlon or two, and is obsessed with surfing. And when the ear buds are in? It’s the same music that skiers have been shredding to for decades: Led Zeppelin, Bob Marley, Bob Dylan and the Rolling Stones. 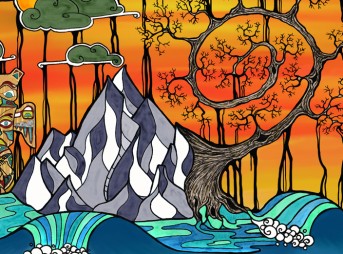 Harness the Great Outdoors and Express Yourself