Dani is a Basque Country-based artist. She was born and grew up in Chile, a country with more than 4,000 km of varied coastline. Thus, it was only natural that the sea became her life passion. In 2010, Daniela moved to Europe and chose another coastal city, San Sebastian, as her artistic residence. Since moving there, the sea has continued to imprint itself on her mindset, and she often brings these intense images to life through various techniques. Her work conveys the deep sense of respect and passion she feels for the ocean through a clean and intense style. Dani's artwork has been featured in several galleries across Europe, and she has worked with various surf brands. Also, her art has been auctioned in several places, including Christie’s NY Green Auction. She collaborates regularly with the NGO Oceana, and is a member of the new creative collective Panthalassa, which focuses on bringing culture and the ocean together. 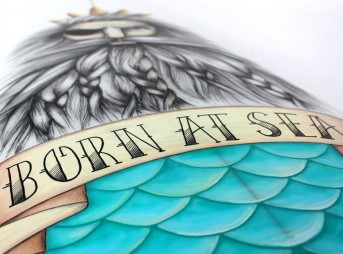