I became Professor of Planetary Geosciences at the Open University in November 2013, having been a Senior Lecturer in Earth Sciences since 1994. Before that I was a Lecturer here. I am now in the Department of Physical Sciences, but until 2011 was in the former Department of Earth Sciences. During 1999-2004 I was Director of Teaching and Geosciences Programme Director. I have also been Leader of the IAVCEI Commission on Remote Sensing, and in 2005 I was appointed to the PPARC Solar System Advisory Panel and the BepiColombo Oversight Committee. In May 2006 I was appointed UK Lead Scientist (now lead Co-Investigator) on MIXS (Mercury Imaging X-ray Spectrometer), which is the only UK Principal Investigator instrument on BepiColombo, the European Space Agency mission to Mercury to be launched in 2017. I chair ESA's Mercury Surface and Composition Working Group. I was also a member of the Science Advisory Panel for C1XS, the X-ray spectrometer on Chandrayaan-1 (launched 22 Oct 2008). In 2006-7 I served on the ESSC/ESF Ad Hoc Group on Definition of a science-driven European scenario for space exploration. My research interests centre on the study of volcanic activity by means of remote sensing, and volcanology and geoscience in general on other planets. My landmark book 'Planet Mercury: From Pale Pink Dot to Dynamic World' was published by Springer-Praxis on 14 Dec 2014. I also wrote 'Volcanoes, Earthquakes and Tsunami, A complete introduction' (new edition 2015) and 'Geology, A complete introduction' (new edition 2015) for Hodder's 'Teach Yourself' series, and 'A Very Short Introduction to Planets', Oxford University Press (2010). A companion volume 'A Very Short Introduction to Moons' was published in November 2015. 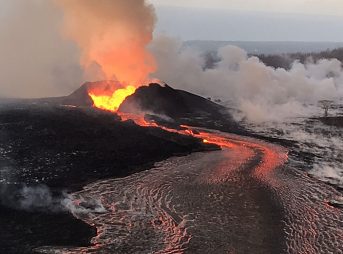 Is There a New Volcano on Hawaii?