Air sports and everything outdoors have been a passion of Graham Dickinson's since he was young. When he was 15, he remembers watching a video of Jeb Corliss's "A Year in the Life" and it inspired him to turn away from the traditional life of office work and 9-5 jobs that many others in his school were headed toward. He instead embraced a life less ordinary and chose to dedicate his time to following his passions and chasing his dreams. He began skydiving at the age of 18 and BASE jumping at the age of 22 after his brother finally agreed take him on his first antenna jump and he hasn't turned back. Shortly after, he worked as a Wing Suit /Tracking Coach and Tandem instructor all over the world in places such as Dubai, California, Canada and Australia. He loves skydiving, but BASE jumping connects to him in a certain way he can't quite explain. He feels the most alive when he BASE jumps because at that moment on the exit point nothing else matters; everything else in the world goes away for that short, sweet moment...no worries, no cares, just bliss...It's this beautiful zen-like state of mind, akin to that of a Buddhist monk. To be so encompassed and focused on the here and now is why he does what he does. 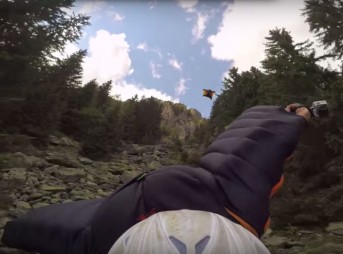