Jeff Clark is one of the most renowned and respected big wave surfers in the world, regarded by the surf community to be a member of a small group of pioneer watermen. Jeff is best known for successfully pioneering the massive waves of Mavericks alone for years before it was discovered by the big-wave surfing community. Mavericks, located south of San Francisco, is considered to be one of the most dangerous big waves on the planet. In 1975, as a hard-charging 17 year-old, Clark first paddled out to this monstrous wave located more than ½ mile off the coast, in his own back yard near Half Moon Bay. For 15 years, he surfed this wave alone, with only his ability and determination to find his way. The spot was, until then, known as a navigational hazard. But Clark saw a perfect wave, and from there he set a course to pursue the ocean’s energy, a living laboratory for his many interests and innovations. Labeled one of the “world’s best big-wave riders” by Surfer magazine in 1994 and among the 100 bravest people in the U.S. by PBS, Clark has been featured in the films Riding Giants, Step Into Liquid, Adventures in Wild California, Discovering Mavericks and many other films. 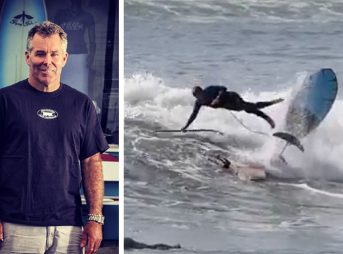 Jeff Clark on the Foiling Mishap Heard ‘Round the World: ‘Fear the Hate, Not the Foil’