Jeffrey Myers is Virginia Beach, Virginia native now residing in the Outer Banks of North Carolina who is known by most for his cynical, often weird and very dark sense of humor. Age unknown, Jeffrey still makes a humble existence as a"professional" surfer and supplements his lifestyle and travels as a freelance writer. To date Jeffrey's surfing accomplishments as a "free surfer" include a TransworldSurf cover shot, Eastern Surf Magazine cover shot, Drift cover shot amongst a select few other publication cover shot images, years of advertising spreads, window displays, posters, featured editorial articles and promotional touring. Jeffrey has made a handful of World Qualifying Series finals and has appeared in over forty five + surf films. Preferring more remote adventures, Jeffrey's travels have taken him to many of the offset islands in Indonesia, the South Africa countryside, fishing villages in Alaska, the depths of Europe and just about anywhere and everywhere in between in his search of surf and sanity... A closet writer for years, Jeffrey's writing resume has entertained clients such as Disney, Time Warner, ESPN, most every surf publication both print and web nationally and internationally, began two screenplays and recently secured a children's book series "The Adventures of The Mighty Nomad" presently in the works. 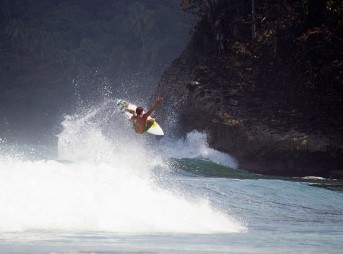 Escaping from Mother Winter: Carolinas to the Caribbean