Jon Foreman is the lead singer, primary songwriter and co-founder of the San Diego rock band, Switchfoot. As they enter their 17th year as a band, Switchfoot has achieved a level of success that brothers Jon and Tim Foreman and their high-school friend Chad Butler never anticipated when forming the band in San Diego in 1996. The SoCal natives have sold 5.5 million copies worldwide of their eight studio albums (including their 2003 double-platinum breakthrough The Beautiful Letdown and 2009’s Grammy Award-winning Hello Hurricane), racked up a string of Alternative radio hit singles (“Meant to Live,” “Dare You To Move,” “Mess of Me,” “The Sound (John M. Perkins’ Blues),” “Dark Horses,” and “Afterlife”), performed sold-out world tours (visiting five continents in the past year alone), raised hundreds of thousands of dollars to aid homeless kids in their community through their own Bro-Am Foundation, and earned themselves a global fan base devoted to Switchfoot’s emotionally intelligent and uplifting brand of alternative rock. Switchfoot has just released their first feature film, Fading West. Part rock documentary, part surf film, and part travelogue, Fading West offers rare glimpses of the longtime surfers on their boards and in the waves, captures the frenetic energy of their live shows, and in the end portrays a journey both epic and intimate. Pro-surfers and longtime friends Rob Machado and Tom Curren are featured in the film, surfing waves and playing music with the band in Bali and New Zealand. 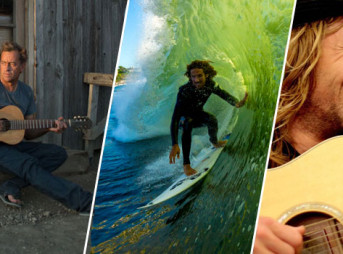