Nathalie Mezza-Garcia is a PhD candidate at the University of Warwick, funded by Fundación CEIBA -Rodolfo Llinás doctoral fellowship. She was spokesperson and owns shares in Blue Frontiers, and is now the founder of the Floating Cities Institute. Her doctoral work is on governance and complexity in Floating Special Economic SeaZones. Her case study is currently the Floating Island Project in French Polynesia; an attempt to build the world's first floating Special Economic Zone, in the middle of the Pacific ocean. In 2016, the government of French Polynesia signed an agreement with The Seasteading Institute due to the Institute's mission of creating of politically autonomous human settlements on the ocean and the government's interest in adapting to loss of land due to sea level rise. Her research looks at the interplay of three tendencies which make possible projects like the Floating Island: floating architecture and sea level rise, extraterritorial jurisdictions such as blockchain and Special Economic Zones. She previously hosted the Blue Frontiers Podcast about floating projects. 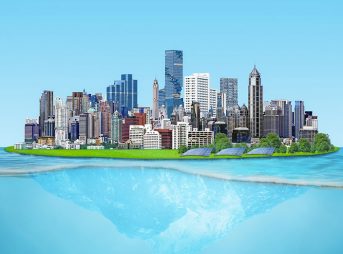