Russell Drumm was born in Syracuse, N.Y. on a snowy Feb. 8, 1947. He grew up in Levittown, Long Island, source of his rather black humor. After graduating from Colgate University, he earned a masters degree in filmmaking at Columbia University. After working on documentary films including the Academy Award-winning “Harlan County U.S.A, ” he fled the city to work as a deckhand on a commercial fishing boat out of Montauk, N.Y. A subsequent stab at running seafood-processing business ended when the supply of Jonah crabs was curtailed. Drumm landed on his feet at The East Hampton Star newspaper where he has worked for the past 25 years reporting on sport and commercial fishing, the environment, and local history. He has been a contributor to Smithsonian, Surfer’s Journal, Graphis, and National Fisherman Magazines. He has previously published two books, “In the Slick of the Cricket” a first-person account of sailing with Frank Mundus, the shark-fishing captain who was the inspiration for Quint in Peter Benchley’s “Jaws,” and “The Barque of Saviors,” the history of the sail-training ship Eagle’s passage from the Nazi Navy to the U.S. Coast Guard. Drumm spent part of his youth in Hawaii, where much of his most-recent book, “A Rogue’s Yarn” takes place. He lives in Montauk with his wife Kyle, four surfboards, a sailboat, and Cha Cha the cat. His daughter Melissa, a graduate of the University of Hawaii, lives nearby. 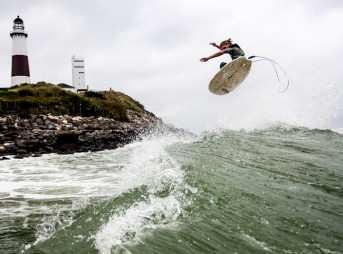 Montauk and the Surfing Medallions of 1967