A native of the North Carolina coast, Walker Golder grew up exploring the marshes, tidal creeks, and beaches near his home on Wrightsville Beach. At every spare moment, he was around the water. He developed a keen interest in waterbirds and shorebirds early in life and pursued this interest at the University of North Carolina at Wilmington where he pursued a master’s degree in marine biology. Walker was invited to join the research team conducting a statewide census of nesting waterbirds in 1983, studied nesting terns and skimmers on the outer banks of North Carolina during the summers of 1984 and 1985, and served as Warden/Biologist for Audubon's Battery Island Sanctuary from 1986-89. As an avid surfer, angler, boater, and photographer, he’s still on the water at every opportunity. Walker was hired by the National Audubon Society in 1989 as the first manager of the newly-created North Carolina Coastal Islands Sanctuary System. Under his management, the North Carolina sanctuary system has grown to 21 sanctuaries that protect more than 25,000 nesting pairs of waterbirds and shorebirds, 35% of North Carolina’s waterbird population, including some of the state’s most imperiled species. Walker launched the North Carolina Important Bird Areas program in 1998, one of the state’s most significant bird conservation programs. In 1999, Walker became Deputy State Director of the North Carolina State Office and leads Audubon’s coast and marsh program in North Carolina. He also is the leader of the National Audubon Society’s Atlantic Flyway coastal program. Walker has worked on conservation projects throughout the Atlantic coast of the U.S. and The Bahamas, authored or co-authored 14 publications, and received numerous awards for his work. 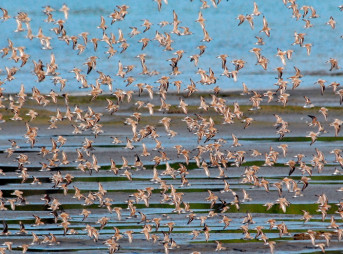 Sharing Our Seas and Shores with Shorebirds