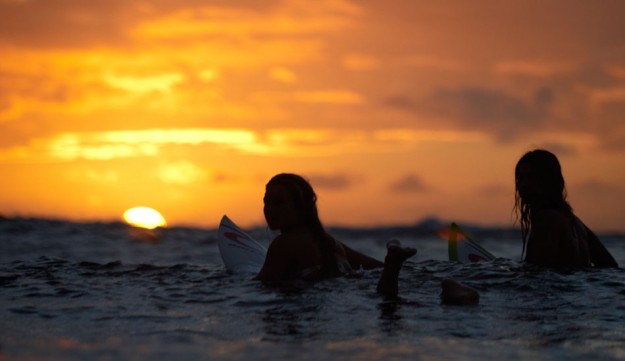 Are women seen as less sexual or more sexual when wearing a wetsuit? Photo: Clare Pluekhahn

The surf industry loves the bikini-clad surf chick, but that doesn’t really happen in the cold, fog-shrouded waters where I am. There are hot girls who rip here, and, for better or worse, they’re all covered up. Is the wetsuit the burka for the cold-water surfer girl?

When I surf, I suit up. This means a black, hooded 5/4/3 wetsuit. I eschew booties and gloves, except on the bitterest of days, but I know others who do not. Sometimes people are head to toe in black neoprene. If they are lucky, there is a small swath of blue flair. Wetsuit technology for women, for the most part, is way behind men’s technology when it comes to cold-water suits. I know girls who wear men’s suits.

If I buy booties, they are men’s booties. Any new and enviable technology takes longer to drill down for women who surf in cold water. We are covered from head to toe by thick black neoprene, which is usually designed by men. If I think about this too hard I get dizzy. This straightforward non-gendered approach might appeal to some, but I’m the kind of girl who wants something different – I want wetsuit style and flair. So, I saved and I bought a custom-made pink wetsuit years ago that could only be made in 3/2 (sigh). I wear it when I travel to Southern California or on the handful of warm days here in the city. I feel like a super hero when I wear it, and I suspect I might look like one too. I mostly certainly make a splash in the NorCal waters where it is often hard to discern a guy from a girl until you are in the lineup. Seeing Matt Wilkinson’s tie-dyed wetsuit this past fall when he was here for the Rip Curl Pro Search made me happy, and also green with envy.

I wonder if guys see us as one of their own while we are suited up? Are we seen as less sexual or more sexual? The allure of the forbidden covered object. Never has what I wear on a regular basis had so many implications. When sporting a bikini on vacation, it’s fun on multiple levels. It is less constrictive, more individualized and I feel a lot sexier when surfing. It is also very easy. It’s hard to feel like a hot surfer chick when you’re covered in black neoprene, usually cold and wrangling your pale body out of a thick, hooded wetsuit because it’s been foggy for weeks straight. Maybe this androgyny should make me feel liberated. Maybe instead of guys checking out my ass I would get judged more on the waves I’m riding. Maybe it doesn’t matter at all.

At certain spots around the Bay Area, the guys don’t bother with a towel when doing the wetsuit change. I’m not sure what to make of it. I don’t dare adopt these practices. While in Australia I was told that approaching a girl during her wetsuit change showed a lack of etiquette – before or after is fine, but not during. When putting on a wetsuit, I am very conscious of my towel placement, and most of the men I surf with are not familiar with this level of discretion, as previously mentioned. I suppose living in warmer waters there is no reason to have this etiquette; you have the ability to just up and go with minimal effort. Since I don’t see myself moving out of San Francisco any time soon, I suspect I’ll have to accept the extra effort of suiting up, and accept that my individuality will have to be revealed through my surfing abilities.