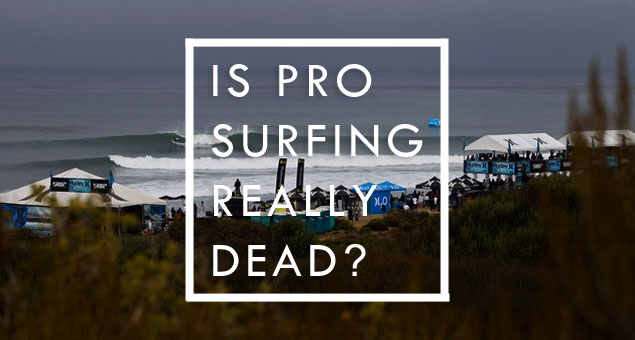 What if pro surfing were actually dead? Would surfing really be better off? Photo: ASP

After surrendering to a flood of questions surrounding its executive leadership, the drug-related death of one of its brightest stars, and an unrelenting wave of public criticism concerning everything from the scheduling of events to the scoring of competitors, the ASP announced today that it was ceasing operations, effectively shuttering the governing body of professional surfing. The announcement by ASP Executive Chairman Richard Grellman came just two weeks after former ASP CEO Brodie Carr resigned following a high-profile math error prematurely awarding this year’s ASP World Championship Title to surfer Kelly Slater and only days after releasing its 2012 events schedule which was to feature 12 contests at premier breaks around the world with $5,675,000 in prize money. The announcement sent sponsors scrambling to rethink their global marketing strategies and competitors to rethink their careers.

None of this is true.

But what if it were? Would surfing really be better off?

Clearly, surfing as a professional sport faces unique challenges. It stands at the mercy of geography, weather conditions, powerful brands and an inherent assortment of independent-minded competitors and fans, all with their own strong opinions about what surfing should or should not be. It’s an enigma, and so is easy to knock. But that doesn’t mean that the ASP and competitive pro surfing are worthless. Or worse, as some critics argue– destructive. Indeed, they’ve helped many surfers enjoy great careers in a sport they love. They’ve also helped surf-related brands to thrive, producing even more of these same lifestyle opportunities. And, they’ve progressed the overall level of surfing. Many might argue that this last point isn’t true, but pro surfing provides the macro-structure for amateur surfing, which drives the advancement of our most talented youth. If there was no structured pro surfing, you’d likely lose a lot of that. The ASP also continues to modify its judging criteria to conform with advancement in the sport, quirks like the seemingly renewed emphasis on floaters and occasional questionable scoring, notwithstanding. The ASP and pro surfing have also long provided a generally stable platform for surfer skill rankings and credibility. Is the system perfect? Obviously not. Nothing in this world is. Can it “miss” on people like Dane, Jamie O’ Brien, Bobby Martinez or others? Sure. Which is not to say that some responsibility doesn’t fall back on those same surfers to perform within the existing infra-structure if they or their sponsors feel a need for validation (or prize money). Not all of them do…

That’s a matter of choice.

And choice is always good.

That’s why I’m thankful for the ASP and the sponsors who support them. If you don’t like professional competitive surfing, don’t attend their events. Don’t watch them online. Don’t buy their sponsors’ products.

Take your board and go home.

Just to be clear – I’m speaking from the perspective of a life-long surfer, traveler and pro surfing fan (currently ranked 58th in Fantasysurfer). I’m also a marketing professional (but outside of the action sports industry, and California). But honestly– I am amazed at the voracity of the criticism leveled at the ASP and its institutional sponsors, when all of them have worked extremely hard over many years to advance our sport.

Most of the same people who rip the ASP also knock the surf mega-brands (Quik, Billabong, Rip Curl, etc.) as “soul-less”, but I think that’s lame. Those companies were started by people who were passionate about surfing. They loved it so much, they wanted to build their lives around it and they made that happen. Then, they created more opportunities for so many others to do the same thing, not to mention carrying the load when it came to promoting the sport, sharing it with the “outside” world and helping bring more of it to us through a variety of marketing and media channels.

Some decry the the mega-brands’ burgeoning relationships with China. It is no surprise that their eyes are fixed upon China due to the sheer size of markets there and the fact that China already has a vibrant youth action sports subculture. That is simply the nature of globalization, an inherent byproduct of advances in transportation and (especially) communications technology over the past 20 years. It does no good to stick your head in the sand to try and ignore it. Look at a well-regarded core action sports brand like Camp Woodward. Rest assured, they raked in a chunk o’ change taking their brand to China. And make no mistake- that wasn’t even about straightforward consumerism on China’s part, but rather the Chinese government’s ultimate goal of having the proper training facilities in place to soon begin dominating us in Olympic skateboarding and BMX! The flip side? At least the flow of goods is running from west to east for a change and perhaps as we export more western culture, an unquenchable thirst for freedom and independence will come in the box.