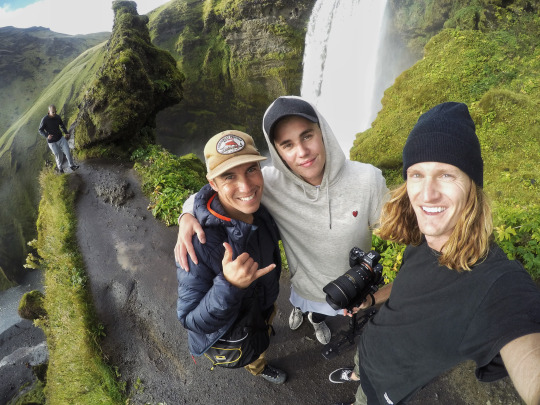 Do you know when you’ve become a mega-successful global photographer?

When Justin Bieber[’s posse] invites you out of the blue to hang with him in Iceland because he thinks you’re a photo God, well, you did it. Congrats.

Sure, there are other indicators of success, but when your imagery becomes the gold standard by which the Biebs judges all other photos, and you don’t even know the Biebs (yet), you’re doing something right. And who would have thought the man to earn that crown would be a fella who got his start by shooting humans riding mounds of ocean energy on foam slabs covered in fiberglass?

It turns out that Rory Kramer, Bieber’s videographer, is a huge Chris Burkard fan. Kramer explains via his Tumblr:

“When I first became a part of Justin’s team months ago we bonded over a very talented photographer named Chris Burakrd. I admired and looked up to his work and Justin loved his work as well.

Every photo I took in Greece and showed Justin, became a little joke: “Great picture, but Chris would’ve taken a better one. You’re my 3rd favorite Instagrammer…right behind myself and Chris Burkard.

“That gave me the idea to reach out to Chris about locations to check out in Iceland since he has been. Chris immediately responded asking for my email and number so he could give his suggestions on places to go…Justin heads back into the booth to record vocals when he stops and says, ‘Just ask Chris if he wants to come with us.’”

“That’s when Chris got a message at 6am, packed, and caught a flight an hour later to meet us in Iceland.”

It turns out Burkard made fast friends with Kramer and Justin Bieber, taking them outside of the nation’s capital to visit glaciers, cliffs, and the scenery you’d typically see on Burkard’s Instagram feed. Apparently, with the exception of the cover, imagery Burkard captured on that trip comprises the majority of Justin Bieber’s new album “Purpose.”

“I actually didn’t direct the video, but I did take [Bieber] to Iceland and help him and his filmer make the video,” Burkard wrote via email. “It was a good time. Unreal humans.”

The video below for the song I’ll Show You is the result of that good time.

As Justin Bieber might tease: “It’s good, but I think Burkard might’ve made a better one.”