On December 12, 2009 on the North Shore of Oahu just a few hours after Mick Fanning cemented his second ASP World Title, Stab Magazine writer Chas Smith and the newly-crowned two-time World Champion shared an awkward and unpleasant exchange that resulted in Fanning calling Smith a “f—cking Jew” several times before Smith was escorted from Rip Curl’s beachside estate. While that exchange could have been filed into a bin full of awkward, unpleasant interactions in the history of testosterone-driven clashes on the North Shore, it went a much different route. It went to print. And that event, from its debated retelling to its controversial reception by purveyors and consumers of media inspired me to investigate bigotry in surfing more broadly. It needed to be done, if only because it hadn’t.

While surfing (like most sports) can be a transcendent unifier, it has also developed an astoundingly ironic and nuanced culture. We sell ourselves as inclusionists at every opportunity, yet we often conveniently forget to acknowledge that much of our world revolves around status signifiers, intricate hierarchies, and flat-out exclusivity. To a large extent, surf culture thrives on divisiveness. Haole. Kook. Grom. Seppo. Locals Only. Longboarders. SUPers, etc… In the surf world, Hawaiians aren’t considered Americans. And most Hawaiians like it that way; Surfing can be a parallel universe, and at times, we’ve excused some overtly bigoted behavior regarding race, religion, and sexuality. As a result, I think it’s in surf culture’s best interest to take a closer look at the blemishes we’re all too eager to Photoshop from the frame. Maybe then we’ll actually embrace the ideals we espouse, and I’m confident that surfing’s image – even with a smudge – will be just as inspiring. 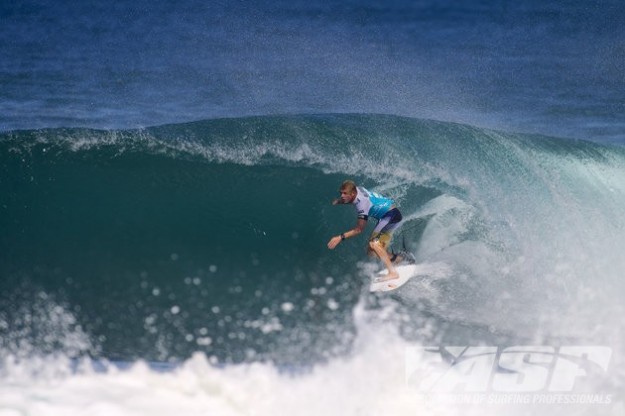 “It was part of a broader story that was just a snapshot of the North Shore,” said Chas Smith, whose article entitled Tales of a F—king Jew appeared in Stab’s January/February 2010 issue. “My whole intent in the way I wanted to cover it was just day-to-day snapshots of what it felt like – from the company houses to the feeling on the beach to the competitions to every part of it, and since that was something that happened…it became part of the story.”

It became much more than just “part of the story.” It became the story – attracting global attention when Fanning’s lawyers pressured Stab to remove the issue from newsstands. Fanning declined further comment, but offered a public apology for using anti-Semitic language in a formal statement on his web site shortly thereafter.

Fanning also apologized to the NSW Jewish Board of Deputies and went on to condemn Stab’s tendency to publish inflammatory editorial. “Prior to the exchange with the reporter, I had refused to speak with him because I understood he worked for Stab Magazine and that it had previously published articles which I believed were racist and anti-Semitic,” said Fanning. “I strongly object to views, statements and comments of that nature.”

Fanning, whom I’ve interviewed at length several times but otherwise know very superficially, has always carried himself respectfully and diplomatically in our exchanges. He also has a strong record of public service in minority communities.

“Mick’s thing was a big mess,” ten-time World Champion Kelly Slater wrote me via email in September. “We’re still talking about it now. If the true situations are understood they don’t turn into this. Stab likes to get ‘inside’ info then sensationalize it for their own gain, so there were a lot of seemingly innocent people in that situation pointing fingers at Mick but creating the situation in the first place.”

Slater and Fanning make a salient point in identifying Stab’s record of publishing anti-Semitic and/or racist language. In 2008, Stab published a Fascist themed Issue that was guest edited by Chas Smith, which began with a passage from Adolph Hitler’s Mein Kampf and the following introduction, in the words of Mr. Smith:

“Maybe I slather a surf magazine with Goring, Himmler, Eichmann, Hess, Jodl, and Raeder because I can…That might make me a lazy/sadistic asshole, using simple imagery loaded with negative meaning in order to make a pointlessly shocking impression. You might be very angry with me when, at the news agency, you see an old Auschwitz surviving grandma weeping uncontrollably at the symbol of her people’s destruction plastered on a surf magazine….OR it might make me the super funnest person on Earth! Swastikas? Yaaay! Hate-filled ranting? Yaaaay! Totally fabulous uniforms? Yaaay!” – Chas Smith, Stab Magazine Guest Editor

Smith (who is a Calvinist Christian) told me (Jewish) that he feels justified in publishing editorial of this variety without much respect for its context so long as it provokes dialog. “From my perspective, I totally understand that all of these things are dangerous areas, but if nobody talks about them, or everybody talks about them in the same way, then I don’t know how a dialog can happen,” Smith told me in a phone interview shortly after his article was published. “If I’m going to be around and editing myself always I don’t see what the point of writing is. I think that being an edgy publication there’s always danger. You never know where the edge is until you fall over it.”