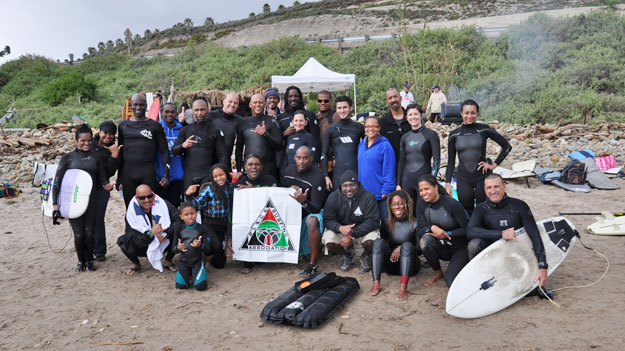 By contrast, Shaun Tomson, a Jewish surfer and former World Champion who grew up in South Africa during the peak of apartheid feels that surf culture isn’t particularly unkind to any group, but struggles the same way most cultures do when addressing complex issues.

“I don’t think surfing is a discriminatory culture,” says Shaun Tomson. “I think there are elements of racism in the surfing culture. I mean, calling someone an ‘f-ing Jew’ is as bad as being called an ‘f-ing haole’ or being told to get off a particular beach because you don’t live there. I don’t think that surfing is deliberately a discriminatory sport as in it’s a white man’s sport. You go to Hawaii and there are more Polynesians surfing than there are Caucasians; that’s where our sport came from. It’s the spiritual birthplace, and the roots of our sport are not in the Caucasian culture but in the Polynesian culture.“

“I’ve seen the effects of racism,” continues Tomson, who along with his dad, provided Eddie Aikau a place to stay after Aikau was refused service at a South African hotel in 1972 because of his skin color. “I think I’ve been the victim in some ways of it, but the way to snuff it out is to bring it out in the open – not sweep it under the rug and try to ignore it. I think just generally surfers need to be more compassionate and more considerate about other people, other surfers, and other population groups. In the last three or four years there has been a general breakdown in the way surfers treat one another in the lineup. I mean, it’s war out there; I surf Rincon all the time and I think it’s indicative of the lack of passion that one surfer feels toward another and I think an issue like [Fanning’s comment] can help us reevaluate how we treat other people.”

In January of 1974, Tony Corley, an African-American surfer from San Luis Obispo, wrote a letter that was published in SURFER Magazine to reach out to other black surfers. He had only met a few since he started surfing in 1963, and a few months later he began to receive responses. The second letter Corley received (as dictated by Corley) read: 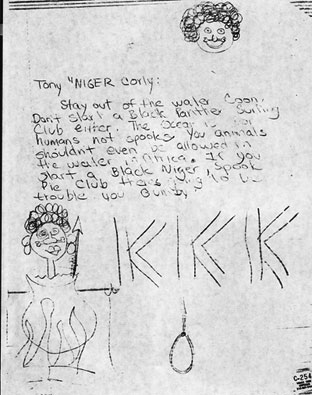 “Stay out of the water, coon. Don’t start a Black Panther Surfing Club either. The ocean is for humans not spooks. You animals shouldn’t even be allowed in the water in Africa. If you start a black nigger, spook pie club coon surf club, there’s going to be trouble for you, gumby.

At the bottom of the note were the letters K-K-K, a picture of a hangman’s noose, and a sketch of an African man burning in a pot of flames.

Soon after receiving that letter, Corley founded the Black Surfing Association. “It was for fraternity,” says Corley. “There were other white surfers around and they befriended me and I befriended them too, but after the surf session when we’re hanging around and always somebody would say something about a nigger or a nigger joke or some kind of shit like that, and it’s like, ‘God dang it…you know?’ What should I do? Should I fight or flight? Do I want to go up and sock him in the head and have three or four guys jump on me or do I just want to leave it alone? In a way, that’s kind of why I started the Black Surfing Association.”

Corley, now 61, has maintained the organization and its hundreds of members to this day, effectively becoming a patriarch to the black surfing community.

“All my acquaintances and members have a racist story to tell about being in the water or outside of the water as well,” says Corley, “but Mother Ocean knows no prejudices at all. She’ll slap the shit out of you or make love to you and bring you back again. She’s a wonderful woman.”

Ted Woods, a young filmmaker based in Los Angeles, decided to examine the intersection of African-American culture and surf culture in his 2009 documentary, Whitewash. What he found, was a community with very little representation and a surprisingly inert social structure. After all, most U.S. beaches (like Santa Monica’s “Ink Well” ) were fully segregated or reserved exclusively for whites until Brown vs. Board of Education of Topeka deemed segregation unconstitutional and catalyzed the Civil Rights Movement in 1954. Even then, old habits die(d) hard.