Surfing is really the only context in which it’s somewhat socially acceptable for an adult to pee themselves. Out for a round of golf and need to take a leak on the tee box at the 5th hole? You’d better save it until you get off the 9th green. At the movies and regretting that you picked the seat dead center in your row? Well, you’d better be ready to apologize to the 14 people you’re about to step over and the five you’re going to hit in the back of the head on your way out, because relieving yourself in that comfy gigantic theater chair isn’t an option. But feeling the urge between sets? Let her rip.

As if peeing yourself at the dinner table or in your own bed at night wouldn’t already be crazy enough, in any normal situation, everything you’re wearing would be thrown into the wash machine without hesitation – or just flat out burned and forgotten about, never to be mentioned again. But not surfers and their wetsuits. Nope, the standard operating procedure after an hour and a half of swimming in your own urine (and in some places these days, swimming in others peoples’ “stuff” too) is to run under an outdoor shower for a little less than a minute and maybe dunk the neoprene in a bucket of water once you’ve taken it all off. Yes, wetsuits are pretty disgusting things.

Now that the unnecessary rant is completed, we can talk about the fact that nobody’s every created a legitimate wetsuit washer. We can’t put them in machines, but the tub of water dunk and soak is pretty much as intense as we get with cleaning our suits. Apparently the BULLY is our first best remedy to all that. It’s essentially a hanger and a shower head combined to wash suits inside and out which, let’s face it, most of us do a poor job of. According to the new indiegogo campaign created for the product, it looks like the washer system is going for about $89 a pop right now. And who knows what they’ll retail for if the $100,000 fixed goal is reached over the next month? But I imagine if you can keep your next wetsuit in good shape for longer because of it, and even put off needing a new suit altogether by virtue of taking better care of the one you have, the $89 pays for itself. But from a water conservation perspective, the product should be pretty valuable. According to BULLY, we use an average of 35 ltr of water to maintain our wetsuits with the wash tub method, and another 110-300 ltr of water per minute when using a hose to rinse them out. This irrigation system claims to use just 14 ltr per minute because it can be used at a lower hose pressure of 24 psi, as opposed to the standard 60-80 psi of running your water hose as is.

Now if these guys can design a BULLY 2.0 model with full wash and dry features, they might be sitting on a gold  mine. 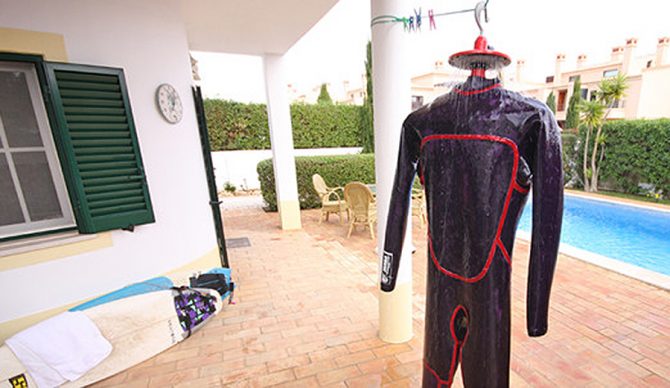