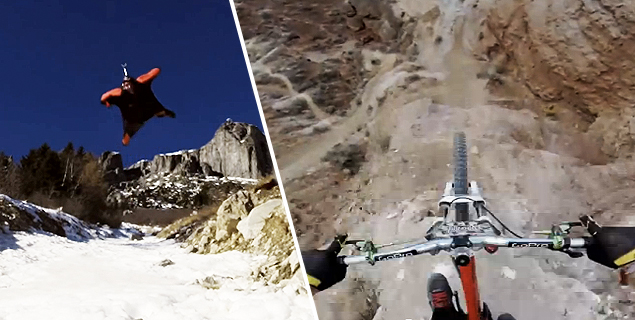 “It is the massive demand and Internet celebrity that accompanies potentially fatal GoPro videos that have elevated the risk-taking to new heights.”

The mecca of extreme snow sports begins today, and in the excited wake of Sochi’s qualifiers lingers the melancholy of last year’s tragedy. During what has become a rather widely watched competition and media spectacle, two snowmobilers — two brothers and crowd favorites, Caleb and Colten Moore, crashed and crashed hard: one separating his pelvis; the other, older sibling losing his life. It was the first fatality of the decades-old X Games, and a morbid reminder of how far we’ve come from the competition’s humble, relatively grounded origins, propelled into the public eye by weeklong coverage on ESPN2 and ABC, and even more so by web virality across social media platforms as well as digital publications and blogs. And while the sports’ inclusion in the Olympics might exemplify the marketability of the industry, it is the massive online demand and Internet celebrity that accompanies potentially fatal GoPro videos that have elevated the risk-taking to new heights. Without consideration, it will become a serious hazard.

Closed, controlled competitions like the one in Aspen might very well make changes to address safety concerns — following Caleb’s death they pulled the freestyle snowmobile demonstration in France and soon thereafter discontinued the best trick competitions in both snowmobiling and motocross — but the athletes themselves (and most extreme sports athletes, including the everyday type) are not confined to courses marked by out-of-bounds signs with emergency crews on hand. And similar to the increasingly crowded lineups at once locals and experts-only waves, more people are throwing caution to the wind. See the exodus to Jaws these past few weeks. The GoPro footage from Pipeline. Wingsuits soaring mere feet above ground:

And if we go wild for these once-impossible feats, we go wilder when that aforementioned impossibility is realized. Wipeouts from the North Shore. Maya Gabeira’s near drowning at Nazaré. A base jump gone wrong:

With each additional view to the counter, the business models of the GoPros and Red Bulls of the world are affirmed — their pervasive reach and influence extended further into our collective conscience. It’s not that they necessarily profit from the falls, but rather from this outrageous extreme. An extreme that has long since turned its back on sanity. The way that we respond to crash landings and broken bones is arguably sadistic. But it’s also a part of the natural evolution of sports birthed from the fringes of the mainstream.

The X Games were born from a boom in lifestyle sports back in the early nineties when today’s staple tricks were being dreamed up for then-mind blowing video game consoles, not all that different from how publicly available wingsuits were awe-inducing imaginations in science fiction novels mere years ago. The 1080° was an absurdist franchise before anyone even considered attempting it. Yet in time it was successfully landed. Soon thereafter it became commonplace at the winter events. And now, born from that phenomenon is a sentiment that is less about the competitions and more about a seemingly limitless extreme that pushes beyond a handful of high-flying antics. The more technical training and revolutionary gear encourage athletes to go bigger, charge harder.

There are even insurance programs targeting the industry, from Xtreme Sports Insurance to brand-specific coverage plans, and X Games athletes are all required to have insurance. But that only further stokes the fire.

And there’s a larger audience demanding this hard-charging content, meaning athletes risk for footage more often. It has become recorded stunt after death-defying stunt with programs such as Jackass and Nitro Circus and our Mad Huey’s alongside the countless YouTube clips circulating social media platforms. It is an all-encompassing, never-ending televised Evel Knievel-esque performance for the people. And when the crowd wants more, the athletes and their sponsors give it:

And to make matters even more concerning, amateurism is running rampant. As are GoPros being attached to helmets or chests or equipment or being held by free-wielding limbs. Where it was limited to experts before, this readily available footage has numbed younger generations to risk, instead enthralled by the apparent excitement. It’s no longer only experienced and weathered veterans pushing the envelope in professional settings. They’ve been joined by newcomers with a brash fearlessness, strapping on a camera and taking to their local terrain. And therein lies the major concern for the development of these extreme sports: not knowing limits nor recognizing them. The accessibility of wingsuits, and the proximity with which they flirt with disaster (and the escalating mortality rate) has raised cause for alarm. As with base jumping. Motocross and snowmobiling — competition or otherwise. “Extreme” is no longer breaking free of the norm and exploring our own depths and reaching out of comfort zones. It is about embracing insanity, and that has in turn become the norm. We’re sliding down a slippery slope. Many of these extreme sports started from a genuine respect and reverence for the power of nature and the human spirit, to fulfill our greatest potentials, and remained grounded in this respect. As with big wave surfing and surfing in general. As well as backcountry skiing and snowboarding. But the space is turning into a freak show of shock value with no evident end in sight.

Video and the current direction of extreme sports are not intrinsically bad. The athletes live to push the envelope as extreme sports athletes always have, conquering the previously unconquerable. They are aware of the risks in doing what they love. And these publicized feats have given extreme sports an unprecedented platform. But the current medium and reception of video, and the somewhat uncontrollable “evolution,” have pushed us — all of us, professionals and non-professionals — to dangerous levels. And it shouldn’t be ignored.