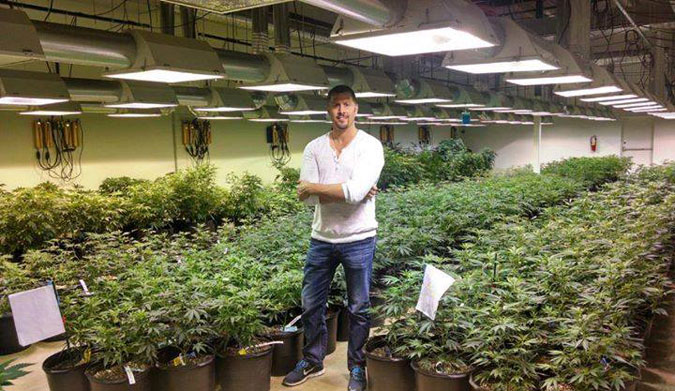 “It’s estimated that cannabis will be a $100 billion industry when America is fully legal.”

This isn’t In Search of Captain Zero or Breaking Bad goes to the beach. And it’s not every day a life threatening injury is the spark to start a multimillion dollar business. No, Derek Peterson’s story is the kind you couldn’t make up: Investment banker carves out a successful career on Wall Street until his off-the-clock passion for riding waves lands him in the hospital with a broken neck. Rehabilitation leads to inspiration when it’s time for a career change, and that career change happens to be running the first ever publicly traded producer of medical marijuana. Of course I’m paraphrasing, but that right there is fascinating enough to have grabbed the attention of national media outlets, debunking the myth of a Spicoli-like beach bum with glazed eyes.

In his early 30’s at the time of his injury, Derek was pitched on an Orange County wave that slammed him to the shallow bottom. During recovery in the hospital he was treated with the strong opioid, Dilaudid.

“It’s fabulous when you’re on it for a week and a half, but when they took me off the side effects were terrible,” says Peterson. “It’s more powerful than morphine. It’s like heroin’s close cousin.”

Between the painkillers, muscle relaxers, and his experience in the hospital with Dilaudid, Peterson was hesitant to stick to the “traditional” cocktail of drugs doctors were prescribing. He’d never been a believer that cannabis had any real medical value, seeing supporters of medical marijuana as recreational users looking for an excuse to justify utilization. But he’d also never really enjoyed drinking alcohol or experimenting with other drugs, so cannabis seemed like a healthier alternative to the dangerous and highly addictive painkillers. He started using cannabis for relief during recovery, and got back to his active lifestyle and career within months.

Coincidentally, with the economy collapsing shortly after, Peterson found it was time for a move from Wall Street. A friend in Northern California owned a dispensary, and from an economic standpoint he saw massive potential for growth. He became the co-owner of Blum Dispensary, serving several hundred patients a day in the same way medical marijuana had helped him. In 2010, he became CEO of Terra Tech Corp, a publicly traded agricultural company specializing in hydroponic farming. Then in early 2014, Terra Tech applied for licenses to operate marijuana farming facilities, making it the first company on Wall Street to enter the medical marijuana industry. So why merge his professional experience with medical history? Because it’s estimated that cannabis will be a $100 billion industry when America is fully legal, according to one Terra Tech executive.

The story itself is fascinating, as well as the business and tech savvy muscle behind Peterson’s operation. They’ve invested $1 million in creating a lab, ensuring patients and customers are getting the same safe products they’d expect out of an organic grocery store. And as Derek points these things out to me, detailing TRTC’s sustainable farming practices, we keep circling back to what drove Peterson to cannabis after breaking his neck in the first place.

“Nobody overdoses from cannabis, but you look at the overdose rates and the addiction rates associated with Oxy and all those other drugs, it’s staggering. It’s scary that so much of our youth is becoming addicted and a lot of the time all it takes is a sports injury to turn a kid into somebody addicted to stuff like that.”

A Terra Tech press release says the company is valued at more than $100 million today. The growth and direction of Peterson’s wildly successful company points to the inevitable nationwide  legalization of marijuana while also advancing the conversation about our perception of recreational drug use, drug abuse, drug culture in sports, even on Wall Street, as Peterson points out.

“That negative stigma was really a bi-product of the war on drugs–’this is your brain on drugs’ from the Reagan era,” he says. “It is the lawyer, it is the doctor, the finance banker. Football players would love to be able to use it in the NFL and athletes are using it for injuries all over the place,” driving home the point that it’s not just beach bums and slackers that are a part of the culture.

He believes the future of legalizing marijuana for recreational use is tied to how we treat dependency and addiction, rather than criminality. It touches on the prevalence of teens abusing painkillers, and of course the stereotypes that must follow being a surfer who put medical marijuana on Wall Street.

“I think it’s a bi-product of anybody that has longer hair, that isn’t clean cut and automatically gets pigeonholed because hey, you’re the guy that looks like the surf bum druggy that used to be in those Reagan-era commercials. You look at a lot of these action sports athletes and you know how hard it is to slap your gear on your car, get out to the beach early before all the good surf spots are busy? Just to have those two hours of relaxation and freedom in the water, and the reenergizing effect that it has. There’s a discipline involved that a lot of people with day-to-day jobs don’t have, but they’d be considered that “productive” member of society even without that same level of dedication to something.”