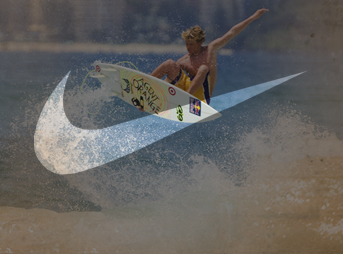 Kolohe and the swoosh surfers will be migrating to Hurley. Photo: Jason Kenworthy

Seeing swooshes on surfboards was fun while it lasted. However, today, Shop-eat-surf.com reported that Nike has chosen to focus on skateboarding and snowboarding while transitioning its surf operations and sponsored athletes to Costa Mesa-based subsidiary, Hurley. This comes after Nike announced its decision to halt sponsorship of the U.S. Open of Surfing in September.

Hurley’s Founder and CEO, Bob Hurley, told Shop-Eat-Surf.com that Nike has elected to intensify its focus in surf – just through the lens of Hurley, which, according to Nike’s website reported earnings of $248 million in the fourth quarter of fiscal year 2012. Nike reported $6.5 billion in revenues in Q4, the largest revenue quarter in NIKE, Inc.’s history.

“This strategy re-alignment further validates why I believe Nike is such a tremendous partner with Hurley,” CEO Bob Hurley told Shop-Eat-Surf.com. “We have the talent and desire to compete hard, as well as the resources and focus to continue to be inspired by athletes and kids. I could not be more excited and energized by the next phase of our adventure.”

If nothing else, expect to see a lot of Hurley surfers (including Julian Wilson, Carissa Moore, and Kolohe Andino) on podiums in the coming year.