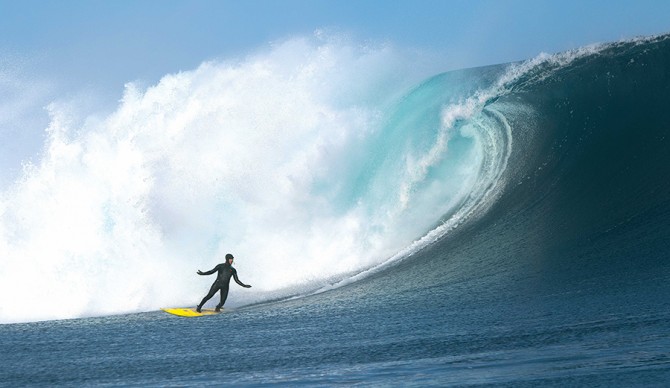 Today, surfing enters a new world. The neoprene free wetsuit is now a real thing, with the introduction of Patagonia’s 2016 line of suits made from a natural plant-based rubber. And this isn’t some gimmick one-off special edition suit for a few surfers who want to feel better about reducing their footprint. The entire 2016 line, 21 wetsuits in all, will be made without the most basic material we’ve all been slipping into for years – often without giving much thought its heavy environmental impact.

The move, made possible by teaming up with Yulex, has swapped out the traditional petroleum-based compound with a plant based natural rubber that will reduce dependency on harmful CO2 emissions by as much as 80 percent. “Surfers, and wetsuit manufacturers – including Patagonia – have relied on neoprene for years, despite the fact that it’s a non-renewable, petroleum-based material with an energy-intensive manufacturing process,” says Hub Hubbard Product Line Manager, Wetsuits. “Neoprene is nasty stuff, but for a long time we had no alternative.”

As for the new suits themselves, the 2016 wetsuit line has been in the works for a while now with front and back zip designs and a new inverted microgrid lining. The entire line will be rated for six different temperature levels, so we’ll have options for everything from a farmer john to a full on winter hoody. Of course, we’re talking about Patagonia here so the color palette ranges from the black on black suit to a standard solid all black. Photos of the suits hadn’t been made available when Patagonia made their announcement early Monday morning, but having seen them in person we can attest these are good looking wetsuits. The line will be introduced in Australia in March of 2016 with six new fullsuits and all 21 wetsuits available in North America, Europe and Japan by July.

As much as this could feel like a novelty coming from some other companies, Patagonia’s effort to say goodbye to neoprene for good has the opportunity to turn into something groundbreaking for surfing. Neoprene is used in everything from laptop sleeves to the fan belt on your car, with plenty of other applications to athletic apparel, accessories and more. So rather than using the technology as a marketing ploy Patagonia and Yulex are pushing for a shift in the entire industry by sharing it with other companies. Surfing has taken steps toward sustainability in everything from the manufacturing of its equipment to tourism, but giant leaps in creating a greener culture in surfing aren’t as widespread. As a group we still tend to choose performance over eco-friendly if we’re forced to take one or the other. The innovations of one company have had a domino effect on the next, until we found ourselves in this place where everybody makes a dependable, flexible, warm suit nowadays. And if Patagonia can give us a neoprene free suit without sacrificing all the futuristic, high performance flexible floating ovens we’ve come accustomed to then it shouldn’t be long before the entire industry takes one massive green leap.